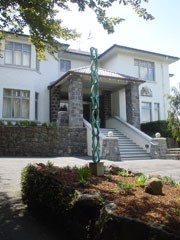 The site of the present day Government House, Auckland was first built upon in the 1880s or 1890s.

Sir Frank and Lady Mappin bought the property in 1921 and spent the next 45 years developing and landscaping the grounds. They gave the House and land to The Queen in 1962 for use as a Royal or Vice-Regal residence.

The House is much smaller than the Wellington House, having been designed as a family home.

Government House Auckland is used for many official functions, including welcomes for visiting heads of state, for state lunches and dinners, garden receptions, investitures and award ceremonies.

Note that this is the second Government House in Auckland. Old Government House (1856), situated on the corner of Princes Street and Waterloo Quadrant at the University of Auckland, was the seat of Government until 1865 when the capital was moved to Wellington. For the next century it was Auckland’s vice-regal residence. Royalty stayed there six times and Queen Elizabeth II broadcast her Christmas speech to the Commonwealth from upstairs in 1953. Since being transferred to the University in 1969, the house has been the University Staff Common Room.