The carvers and timber 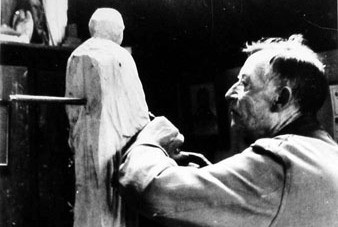 Frederick George Gurnsey in his studio, 1952.

While the carver or carvers of the panels of Lord Islington and the Earl of Liverpool (1912-21) are not known, the similar style suggests they were executed by the same person.

They are believed to have been carved in Britain.

The panels from Lord Norrie (1957) through to Sir Keith Holyoake (1977-80) were carved by Patrick Mulcahy QSM of Christchurch. He also carved the faces of Sir David Beattie’s (1980-85) panel while the remainder was carved by Remi Couriard, originally of Christchurch, but later of the Channel Islands. They also carved Sir Paul Reeves’ (1985-90) panel while Mr Couriard carved that of Dame Catherine Tizard (1990-96). The panels of Sir Michael Hardie Boys (1996-2001), Dame Silvia Cartwright (2001-6), Sir Anand Satyanand (2006-11) and Sir Jerry Mateparae (2011-2016) were carved by Paul Deans, of Christchurch, who signed his panels.

All the panels are carved from oak. Mr Mulcahy and Mr Couriard carved their panels in locally grown European oak while Mr Deans carved he Hardie Boys panel from a Red Oak tree felled in Christchurch in 1993.

The Sir Bernard Fergusson panel cracked shortly after installation and to prevent further damage, metal brackets had to be attached to the back. To prevent cracking, the subsequent Armorial Bearings have been carved separately and then glued to the base panel cut from the same piece of timber. Great care is taken to ensure the grains of both pieces match.