The project in detail 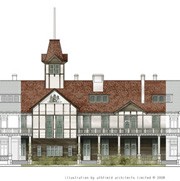 The historic colour scheme for Government House was restored.

Earthquake strengthening: This involved new piles and foundation walls for much of the House and ensuring the foundations were properly connected to the building.

The walls were exposed and strengthened with structural steel braces, many of which were connected to a massive service trench that runs the length of the House. Additional steel frames were also added to strengthen the roof and tower.

An artist's impression of the refurbished Government House.

Weathertightness: The roof was completely replaced. About 200,000 clay tiles, sourced from the same quarry as the originals in Britain, were affixed to 40,000 linear metres of batons and counter-batons by about 400,000 rust resistant stainless steel nails. The stucco panels were replaced and all the doors and windows were refurbished. This work was designed to ensure that they are being better sealed to reduce draughts, which was a major source of heat loss.

Improved exterior layout: The driveway was repaired and reconfigured to emphasise the principal entrance while the porte cochere (cover) over the principal entrance was extended to allow modern vehicles to enter and leave more easily. Access to the House for people with disabilities was improved. Better access was provided from the north lawn to the terraces that lead into the House.

Enhanced heritage values: The chimneys that once dotted the roofline were reconstructed, as are the hoods that once protected the windows. The chimneys that are not connected to gas fires are used as vents for bathrooms and kitchens. The windows were reglazed using low - E security glass and lead lights were reintroduced. Many non-original doors and windows and exterior pipes were removed and the House was repainted in colours that better matched the original colour scheme.

Improved internal layout: The Governor-General's staff was moved to offices in the west wing with direct access to Their Excellencies' offices. A distinct office entrance for staff and visitors off Hospital Rd, away from the formal entrances, was created. The finishing kitchen next to the Ballroom was also upgraded.

Improved standards in the guest suites: The eight guest suites, used by visiting Heads of State and other important visitors, were renovated with modern technology and private en-suites. Furnishings and fittings were replaced and security and modern communications systems were introduced.