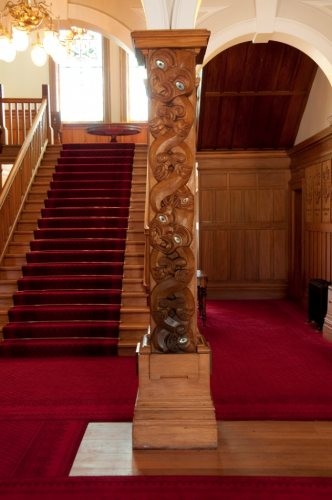 One of two pou, or pillar facings, which feature prominently in the Entrance Hall. The pou are carved out of totara in the Taranaki style and stand more than two metres tall.

Guests to Government House Wellington enter under a covered porte-cochère on the southern side of the House.

The Taupaepae, or official entrance hall, is where guests arriving to see Their Excellencies are greeted.

The two pou, or pillar facings, in the Taranaki-style, were presented to the House by the late Sir Paul Reeves, New Zealand’s first Governor-General of Māori descent. Sir Paul carved a small portion of the eastern pillar himself.

Around the walls are the carved coats of arms of the Governors and Governors-General who have lived in the House since 1910.

The marquetry table was made in the 19th Century by Anton Seuffert, and the two oak porters’ chairs in the entrance foyer are among the few items of furniture to have been in the House since it was built.

The Gavin Chilcott-designed carpet runner was adapted to fit the spaces of the main hall, forming a wall- to-wall carpet at the north end and a carpet square at the entrance. The runner passes through the space connecting the east and west hallways as well as up the main stair. The carpet takes its colour-way from the flowers of the pohutukawa and rata trees.

More images of the Taupaepae