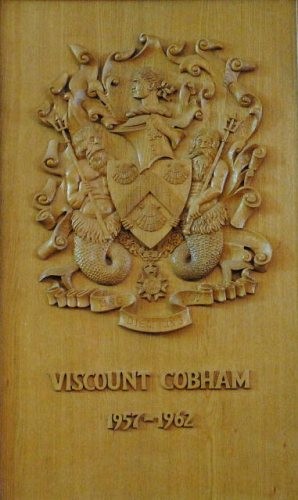 The panels have been carved from various designs; paintings in Armorial Letters Patent, bookplates or illustrations found in Burke’s and Debrett’s Peerages.

The Armorial Bearings of Lord Islington to Lord Galway were mostly inherited and therefore do not allude to the life or career of the then Governor or Governor-General.

Lord Cobham’s panel is based on the Hagley Hall bookplate designed by the eminent British designer and painter, Reynolds Stone (1909-79).

Sir Bernard Fergusson’s panel is based on his bookplate taken from the Matriculation of his Arms by Lord Lyon King of Arms, Edinburgh.

The panels for Sir Denis Blundell and Sir Keith Holyoake were based on Letters Patent designs, prepared by Roger Hayman, a Wellington lawyer and artist, under the supervision of the New Zealand Herald of Arms, Phillip O’Shea. Mr O’Shea designed the Armorial Bearings of Sir David Beattie, Sir Paul Reeves, and Sir Anand Satyanand, based on line drawings prepared by the College of Arms, London. He also designed those of Dame Catherine Tizard, based on a line drawing prepared by Roger Barnes of Auckland. The panels of Sir Michael Hardie Boys and Dame Silvia Cartwright were based on computer-generated drawings prepared by Ian Bowman and others. Sir Keith Holyoake’s Arms were devised by Sir Conrad Swan, York Herald of Arms, and Mr O’Shea.