For Dame Patsy’s final regional visit as Governor-General, she headed north to Taranaki for a three- 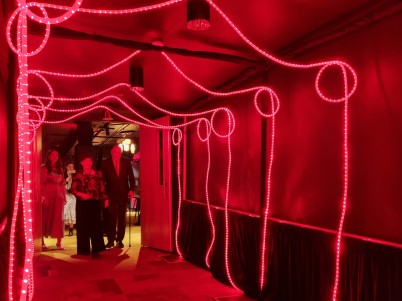 day trip. The first stop on the trip was a celebration gala for Taranaki Arts Festival Trust’s 30 Years of Festivals. TAFT are responsible for hosting some of the biggest arts festivals in the Taranaki region, including the hugely popular WOMAD music festival. The evening included a cabaret performance by Mandy Meadows, singing a selection of songs from her show Piaf: The Legend.

The next morning, Dame Patsy and Sir David were welcomed onto the historic Parihaka marae, a village formed by Te Whiti-O-Rongomai and Tohu Kākahi in 1866. During the New Zealand Wars, it became a home for disenfranchised and displaced Māori, and was known for its use of peaceful resistance against land confiscation. It was invaded in 1881 by Crown constabulary, who spent four years there and imprisoned many of the settlement’s residents. Dame Patsy was shown around the Pā, which is home to many whare built by iwi from around the country. She was taken to a hill near the entrance, with views of the Pā, the urupā and Mt Taranaki. The hill was also the site of a barracks used by the constabulary, which had cannons pointing at peaceful protestors below.

On the marae, iwi leaders had a whaikōrero about Parihaka’s past and their plans for the future.

Afterwards, it was on to New Plymouth’s information hub, Puke Ariki. The striking building is home to a library, research centre and museum that focuses on the natural world and history of Taranaki.

That evening, Dame Patsy presented the inaugural Govett-Brewster Foundation Awards at the gallery’s 50th Year celebrations. The awards recognised people who had been instrumental in the creation and support of the gallery over their 50-year history. The Govett-Brewster Gallery is also home to the Len Lye Centre, a gallery dedicated to the Canterbury-born artist. While there, Dame Patsy saw a performance by one of Len Lye’s kinetic works called Wand Dance.

The final day began with a trip up to the historic Camp House in North Egmont National Park to meet with Department of Conservation, Te Kotahitanga o Te Atiawa Trust and Taranaki Mounga Project to discuss the amazing success they have had in the journey to restore Mt Taranaki’s natural flora and fauna. Together with a huge number of volunteers, the National Park has become the first in the country to be able to say they are goat-free – this has given the natural vegetation a chance to grow back, and has helped the native birds flourish in the area. The final stop on the regional was to Theory Food, a catering company that has combined with charity Gabby’s Starlit Hope, to provide meals for children and their families while the child is in hospital battling cancer. Dame Patsy and Sir David hopped in the kitchen to help put together some meals destined for parents with kids in hospital; on the menu that evening were chicken tacos. Below are more photos for the following engagements:

Parihaka gallery and the speech