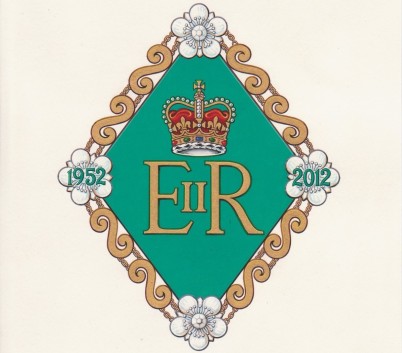 “Queen Elizabeth has been our Queen since 6 February 1952,” Sir Jerry said.  “She continues to be held in very high regard by the people of this country.  As her representative in New Zealand I’m delighted to release this beautiful emblem, which honours her 60 years as our sovereign.”

Sir Jerry said that there would be other ways in which the Diamond Jubilee was officially recognised. “Further announcements will be made in due course.  However, releasing the emblem is a fitting beginning to the programme for the Jubilee year.”

“People are free to associate the emblem with their Diamond Jubilee events,” said Sir Jerry.  “I hope that groups of New Zealanders will think about marking the Diamond Jubilee in their own way.”

The approval of the Governor-General will be required for titles which incorporate the name of the Queen (such as ‘The Queen’s Diamond Jubilee Exhibition’), or which relate to commercial projects.

The emblem has been officially approved by Queen Elizabeth II.  Its diamond shape represents the 60 years of her reign.  Other features of the emblem include a gold koru, manuka flowers and the Royal Cypher, the Queen’s personal emblem.  The emblem was designed by Phillip O’Shea CNZM, LVO, New Zealand Herald of Arms.

Symbolism of the Emblem

The shape of the emblem refers to the diamond (or 60th) anniversary, and the colour alludes to New Zealand’s highly prized pounamu,

The emblem contains the Royal Cypher (the letters and Roman numeral, E II R), which is the personal emblem of The Queen.

Also featured is the Royal Crown (St Edward’s Crown) which is part of the New Zealand Coat of Arms and represents the fact that The Queen is our Head of State.

The koru (which often features in Māori art) is used in the form of those on the chain of The New Zealand Order of Merit. The chain (or collar) is only worn by The Queen and the Governor-General.

The gold of the emblem represents value and achievement.

The chain links represents the role of the Sovereign as a part or link in the New Zealand constitution and the historic links between the Crown and Maori.

The manuka flowers relate to the Badge of The Queen’s Service Order (QSO) which is based on stylised representation of this flower.  The QSO was named to commemorate the fact that The Queen is the first ‘Queen of New Zealand’.  Manuka and manuka honey are well-known for their health enhancing properties.

Statement from His Majesty The King