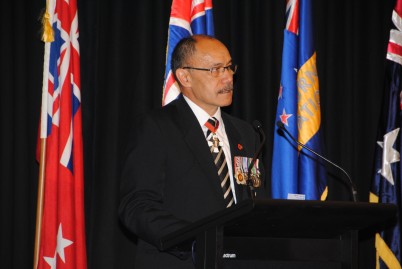 Distinguished guests, ladies and gentlemen warm greetings to you all.  I welcome those of you who have travelled considerable distances to be here.  Today is a special day on which we remember those who fought in the First World War, and all subsequent wars and conflicts.

I am pleased to be here to address the Annual General Meeting of the RNZRSA.

As someone who had a marvellous career in the Army, I can vouch for the huge opportunities a military career offers to develop skills, pursue education and become leaders.  I can also vouch for the strong and lasting friendships made by comrades in arms.

It was this sense of comradeship that prompted the decision of returning Anzacs to form the RSA during the First World War – along with a determination to promote the welfare of service personnel, and to remind New Zealanders of the price of world citizenship.

A hundred years ago today, our international obligations were on everyone’s minds as we were poised to send the New Zealand Expeditionary Force’s main body of men to the other side of the world.

On the 15th of October, 1914, ships carrying troops from Auckland arrived in Wellington, and the following day a convoy steamed out into the Tasman Sea, bound for the Northern Hemisphere.  This was to be the last time many of those men would see the shores of their homeland.

In all, over 100,000 men served overseas.  We don’t have accurate figures for the number of women who also sailed to Europe – determined to do their bit – but we do know that they did everything from starting up hospitals and working as doctors and nurses, to serving as mechanics, VADs, and ambulance drivers.

It is easy to forget that the First World War is only one or two generations removed for some New Zealanders.  We have citizens who can attest to the impact the conflict had on their fathers, uncles and grandfathers – and on the women in their families.

As Governor-General, I have chosen to make service one of the focuses of my work and I welcome opportunities to acknowledge those who have served our country, past and present.

This year I have been privileged to do this on many memorable occasions: the 150th anniversary commemorations to mark the battles of Orakau and Gate Pa; the Anzac Day services at Anzac Cove and Chunuk Bair; the 70th anniversary commemorations of battles at Cassino, and of D-Day in Normandy; and the service at Glasgow Cathedral to mark the beginning of the First World War.

Last month, I had the opportunity to recognise the role played by our oldest Regular Force regiment, Queen Alexandra’s Mounted Rifles.  It was wonderful to see them parade in the middle of Palmerston North, complete with horses, and troopers in First World War uniforms.  Many young people were amongst the big crowd that turned out to see the parade, and they clearly welcomed the opportunity to show their appreciation for the work of our servicemen and women.

Looking ahead, the new park at the National War Memorial to be opened in April 2015 will give the people of this nation a new place to congregate and honour those who have served their country – and to mourn those who paid the ultimate sacrifice.

It will be a fitting place for the national commemoration of the centenary of the Gallipoli landings next year.  And no doubt there will be huge interest in Sir Peter Jackson’s First World War exhibition in the old Dominion Museum building behind the park.

I think it fitting that the new underpass, under the park, has been named Arras in honour of the brave New Zealanders who created kilometres of tunnels near Arras in the First World War.  And from time to time, I hope motorists will have occasion to reflect on how it got its name.

Recently, I met students at Marlborough Girls College who were fortunate to visit France in April.  They visited the tunnels at Arras.  They saw the messages left by the New Zealand troops and tunnellers on the walls.  Some of who would have been a similar age as the girls.  The young women told me they were given a warm welcome by the people of Le Quesnoy; and they saw the sad rows of crosses in military cemeteries on the Western Front.  One of the girls talked about how overwhelmed and honoured she felt to speak at an Anzac Day ceremony there.   These young women will take those experiences with them throughout their lives, they will share them with family and friends, and they will tell their children what they have learnt.

If we want the baton of memory to be passed on to the next generation, they need to hear the stories.  I urge all veterans to make sure they tell their families about their service.  These stories matter.

Our young people are interested in attending Anzac Day services, in making the pilgrimages, in learning the history and passing it on to succeeding generations – if they are given the chance.  So I commend the RSA’s decision to take all eight finalists in next year’s Cyril Bassett VC competition to Gallipoli.  And I hope there will be more such contingents of young people going to Gallipoli and Western Europe in the coming years.

The RSA was forged out of a determination to make sure New Zealanders did not forget their fallen – and a determination to maintain the spirit of courage, compassion, camaraderie and commitment shared by the ANZACs.  In the intervening years, the RSA has been an indispensable part of many people’s lives. It will continue to play a significant role in our communities, particularly when we honour the memory of the gallant generations who went before us.

I wish you well for your AGM and I look forward to standing alongside you at the commemorations in the coming year.