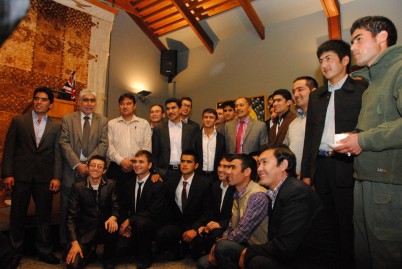 It is a great pleasure for Janine and me to welcome you all to Government House this afternoon.  This gathering is a way for us, on behalf of all New Zealanders, to thank the Afghan interpreters who assisted New Zealand in Bamyan, and to wish them and their families good health and fortune as they prepare to begin their new lives here in New Zealand.

As New Zealanders, we take great pride in our international work on peace-support missions.  As I speak, the New Zealand Defence Force has men and women deployed on 12 operations and United Nations missions across ten countries, including South Sudan, Iraq, Korea, the Sinai and Afghanistan.

We send our people to these places for many reasons.  Having enjoyed the fruits of democracy and the stability it brings, New Zealand stands for civil liberties, the rule of law and democratic values.

Also, New Zealanders played an important role in the establishment of the United Nations, and we have always supported the peaceful resolution of international disputes.  And yet New Zealanders have always recognised that a commitment to democratic values sometimes requires more than words.  Sometimes, we need to take a firm stance, step forward and lend a helping hand.

One of those nations New Zealand has helped has been Afghanistan, and especially the people of Bamyan province.   In April, Janine and I travelled to Bamyan to see the completion of New Zealand’s 10-year mission to the Bamyan Provincial Reconstruction Team.

Together with the people and government of Bamyan and our international partners, New Zealanders devoted their efforts to bringing peace and security to the province.  Together with you we delivered projects in health, education, agriculture, economic development and power generation.

Those achievements, however, would never have been made, or would have taken much longer, if it was not for the people here today.  In Bamyan it was the local people, and especially the interpreters, who we turned to, to assist us.  As events have proved, the interpreters – the “terps” became close personal friends and endured the same hardships as our people.  We are indebted to you, and it was appropriate that the New Zealand Government agreed to your request to be resettled here.

To the interpreters and your families, today marks the end of your transition programme at the Māngere resettlement centre to a new life here in New Zealand.  The weeks, months and years ahead will no doubt pose many challenges as you adjust to a new country, a new way of doing things and a new climate.  No doubt, you will remain concerned for friends and family back in Bamyan and for the future of Bamyan and Afghanistan.

One thing you should be confident about is that your new bond to New Zealand should not reduce the importance of your heritage - the culture and traditions you brought with you.  Like the many colourful threads in a carpet, your being in New Zealand strengthens and enriches the fabric of New Zealand’s society, both now and in the future.

I am also sure that being in New Zealand will offer many opportunities, whether it is for education for your children and wives, new career prospects for yourselves, or making new friends in New Zealand.  In that regard, I acknowledge my friend of many years, Sayeed Mahboob, from the Afghan Association of New Zealand who will be most helpful to you all over the coming months.

Finally, as Governor-General of New Zealand, and on behalf of all New Zealanders, I thank you and your families again for the vital contribution you have made to the success of the New Zealand mission in Bamyan.  I thank you also for helping to keep New Zealanders safe in Bamyan.  And can I add a message from my son who served in Afganistan and wants to thank the four terps who worked with him.  And in Maori, I wish you and your families good health, strength, peace and good fortune for the future.