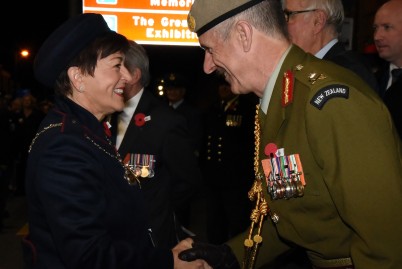 Behold the night that binds, and welcome to the light of this new day. Good morning all. Aku mihi nui ki a tatau katoa, e maranga ake nei, i tenei ata.

Taranaki, the Government, Ambassadors including Australia, and Veterans, greetings all.

Together we carry and fulfil these ANZAC Commemorations.

And so welcome to us all.

On this, my first Anzac Day service as Governor-General, it is my privilege, on behalf of all New Zealanders, to extend a special welcome to all the veterans amongst us today.
I thank you for your commitment to serve your country and to uphold the values and traditions established by your forebears.

Since 2014, our military commemorations have been dominated by the centenary of the First World War, and this year, 1917 will be in the spotlight.

A hundred years ago, most of our troops were on the Western Front, in northern France and Belgium. As the war progressed, the names of obscure villages, towns, woods, and ridge-lines – where so many of our men lost their lives – became part of our national memory.
For the people at home, the war seemed to have no end in sight, and the horror of the Battle of the Somme was still fresh in people’s minds.

During that Battle – in just 23 days in September and October of 1916 – New Zealand’s casualty figures had been nearly as great as those suffered during the 8 months of the Gallipoli campaign. Around 2000 New Zealanders had lost their lives.

We can only imagine the thoughts of people attending services on the following Anzac Day, in 1917.

For the bereaved, an Anzac Day service was the nearest thing to a funeral that their loved ones would ever have.

For those whose family members were still in action, their thoughts would have turned to what was in store for their husbands, sons, fathers and brothers.

They were right to be anxious, as 1917 was the most costly year – in terms of human life – in the three years that the New Zealand Expeditionary Force was on the Western Front.
Our troops in France started the year with some confidence. They had come through the gruelling campaigns of 1916, they had endured cold, mud, rain, snow and shellfire – and they had melded into an effective fighting force, full of resolve.

Our 2017 commemorations focus on three of the battles where they fought, as part of massed allied forces: at Arras, Messines and Passchendaele.

At Arras, members of the New Zealand Tunnelling Company helped prepare an extraordinary underground system that could conceal up to 18,000 troops.

The Arras tunnel that runs beneath our feet – here at the National War Memorial – is a permanent reminder of their work.

At Messines, New Zealand infantry also worked on tunnels where enormous mines were exploded under the German lines.

The June attack on Messines is remembered as a great success for our troops, who had trained hard for months.

However, that success came at the cost of 3,633 casualties, including around 700 dead.
Unlike Messines, Passchendaele became forever associated with military disaster. It is not surprising that the 12th of October 1917 is described by historians as the blackest day in our post-1840 existence.

Poor preparation and appalling weather conspired to thwart our soldiers’ advance on Bellevue Spur. They struggled through mud and shell holes into a merciless hail of machine-gun and shellfire. When a pitiful few reached the enemy trenches, they could not penetrate the barbed wire.

In that one day of appalling slaughter, 842 men died, and that figure rose to 960 as men succumbed to their wounds in the subsequent days and weeks.

As at Gallipoli, some New Zealand families lost multiple family members at Passchendaele. The Tyne Cot Cemetery includes at least five sets of brothers killed on the 12th, and the Newloves of Takaka lost 3 brothers in the attacks of the 4th and 12th of October.

Not surprisingly, Passchendaele and the Western Front were a strong focus at Anzac Day services in the 1920s and 30s, but the public memory shifted with the advent of the Second World War.

This year is our opportunity to cast a spotlight once again on what historian Ian McGibbon has identified as “the centrepiece of New Zealand’s contribution to the Allied effort in the Great War”.

Today, we can pause to reflect on the service of the 74,000 New Zealanders who served on the Western Front between August 1914 and November 1918, the nine soldiers whose valour was recognised with the award of a Victoria Cross – and the sacrifice of the nearly 14,000 who lost their lives.

My final acknowledgement is of the approximately 1000 men from the Pacific Islands, including 500 from the Cook Islands and 150 from Niue, who volunteered in support of the war effort for the British Empire. Recently, in Rarotonga, I was privileged to unveil a magnificent new sculpture honouring the Cook Island soldiers who worked on the Arras tunnels, serving with New Zealand’s Pioneer Battalion.

That expression of pride and sorrow served as a timely reminder of our shared experience of loss and the lasting impacts of war.

We will remember them.