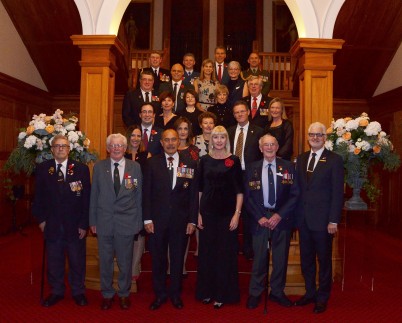 I specifically welcome veterans Reg Pycroft, of the 24th Battalion, who fought in Italy during the Second World War; Robbie Robieson, a veteran of the Korean War; and John Geenty, who fought in Vietnam.

Gentlemen, we appreciate your joining us this evening.  Tonight is a night when we can honour the role that you and others have played in the service of your country in time of war.

Ladies and gentlemen, it is a great pleasure for Janine and me to welcome everyone to this special dinner on the eve of Anzac Day.

Given that many of us will be getting up very early tomorrow morning, I will not prolong proceedings, and I will keep my remarks short.

This is the first time I have hosted a dinner to mark Anzac Day.  It seemed appropriate to do so, on the eve of the centenary of the very first Anzac Day.  It’s also appropriate to share it with our veterans; and with the leaders of our Navy, Army and Air Force; and with representatives of the nations that fought at Gallipoli with which New Zealand has special relationships.

Our experiences at Gallipoli in 1915 – and their aftermath – confirm that strong enduring bonds are formed in times of war, and that old enemies can become firm friends.

I have valued the opportunities I have had to go to Gallipoli, and to learn of what happened there.  The warmth of the welcome that I have received on each visit confirms the close connections New Zealand now has with Turkey.  The government and people of Turkey are most gracious in welcoming the citizens of the countries who were once foes.

Gallipoli has a special significance for New Zealanders and Australians.  The Gallipoli campaign marked a major turning point in our perceptions of nationhood.  Equally, I have come to understand that for Turkey, Gallipoli is central to its story as a nation.

The veterans with us tonight will know that the eve of battle is a time of tense and nervous anticipation.

On this day in 1915, on the eve of the Gallipoli landings, the men on the New Zealand transports included an Anzac of Chinese ancestry - Private James George Paterson of Otahuhu.

We do not know whether Paterson was able to snatch sleep, or if he kept vigil, prayed, talked to mates or quietly reflected.  We don’t know, because Private Paterson was one of the first of the many New Zealand fatalities that morning.

The following month, a Turkish Officer on the peninsula, Ibrahim Naci, recorded in his diary: “Such sadness in the redness of the sunset!  It was as if it was crying for all the tragedies that had occurred on this peninsula”.   Ibrahim Naci was also to die in his first battle.

Tomorrow, wherever we are, at home or abroad, it will be a day to pause and reflect on the sacrifices of the men who fought in the Australian and New Zealand Army Corps in Gallipoli.  More generally, it will be a time to remember those who have served their countries in all wars, before and since.

Tonight we remember the service men and women of Australia and New Zealand, and Canada, Turkey and the United Kingdom who continue to put their lives in danger, in service to their country.

In New Zealand’s case, we remember the New Zealand Defence Force personnel deployed on 14 operations and UN missions across ten countries, and the personnel who are engaged in other overseas activities and exercises.

Tomorrow, they will stop and reflect on those who have gone before – and we will wish them well in their endeavours.