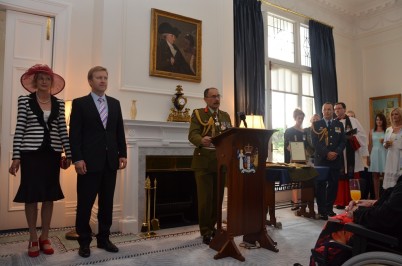 It is a great pleasure for Janine and me to welcome you all to Government House today for this Change of Command ceremony.  This ceremony serves two purposes – to acknowledge and thank Lieutenant General Jones for his outstanding service to the New Zealand Army, to the New Zealand Defence Force and to our country; and to promote Major General Tim Keating to the rank of Lieutenant General and invest him as Chief of Defence Force.  I will deal with each in turn.

This ceremony represents the enduring nature of military command and the dynamic of succession.  Three years ago we went through a similar ceremony at Government House in Auckland, where my predecessor, Sir Anand Satyanand, bid farewell to the previous Chief of Defence Force and promoted and installed General Jones as the CDF.  And so today we are doing likewise – farewelling the CDF and promoting and installing the next CDF.  Having been at previous ceremonies and in all three positions – CDF-designate, CDF-retiring and Governor-General and Commander-in-Chief, I have a sense of déjà vu!  More so because both men we are recognising here today have been long-time colleagues and friends.

General Jones has held a variety of command, training and operational posts in New Zealand and overseas.  His senior-military education was completed in the United States and Australia.  We served together during his operational tour of duty in the Middle East with the United Nations Truce Supervision Organisation, based in southern Lebanon.

General Jones has commanded at a time when deployments overseas have had to be rationalised.  During this time new commitments have deployed to the Middle East, and other New Zealand forces have returned from prolonged deployments to Timor-Leste, the Solomon Islands and Afghanistan.  My wife Janine and I were honoured to join General Jones and Hon Dr Coleman at the ceremony in Bamyan Province in Afghanistan last year when the New Zealand flag was lowered for the last time and the New Zealand Provincial Reconstruction Team departed Afghanistan.  It was also an opportunity to recognise the New Zealanders who had served there, especially the 10 service men and woman who had died on operational service.

General Jones, as Governor-General and Commander-in-Chief of New Zealand, and on behalf of all New Zealanders, I want to thank you for your outstanding service to our country.  I am delighted that your honourable and loyal service was recognised by Her Majesty when she appointed you as a Companion of the New Zealand Order of Merit in the recent New Year Honours.  I look forward to investing you with the insignia later this year.  I would also acknowledge Mrs Debbie Jones and General Jones’ family who have supported General Jones throughout his illustrious service.  I wish you all good fortune and health in the future.

My second duty is to promote Major General Tim Keating to the rank of Lieutenant General and present the warrant appointing him as Chief of the Defence Force.

General Keating has had a similarly distinguished career and with the exception of the role he is about to assume, he too has commanded at the most senior levels in the Army and the New Zealand Defence Force.

General Keating has had extensive operational service overseas.  He was the Commanding Officer of the New Zealand Contingent of the Multinational Force and Observers in the Sinai.  As Commanding Officer of the 1st NZSAS Group he oversaw the first deployment of New Zealand Special Forces to Afghanistan in the wake of the 9/11 attacks on the United States.  Later, in July 2005, General Keating commanded the New Zealand Provincial Reconstruction Team in Bamyan Province, Afghanistan.

General Keating – in welcoming you to your new role - you take command of the New Zealand Defence Force at time of new challenges and opportunities.  During your term as the CDF, I expect there to be calls on your strategic leadership and management experience.  With the reduction of New Zealand’s overseas commitments and the continuing implementation of the Government’s White Paper, the Defence Force and the three services will appreciate time and means to enhance and strengthen capabilities.  While much focus will be on capability development, training and New Zealand based activities your task will be to ensure the Defence Force remains ever vigilant to respond to Government requests, and the vagaries of an increasingly uncertain world.

At this time I would also acknowledge and congratulate Mrs Brenda Keating and the Keating family.  General Keating has achieved successes in the Army and the Defence Force with your unstinting support.  We wish you well for the future.

Ladies and gentlemen, the nature of military command and the dynamic of military leadership require leaders to lead.  There is a Maori whakatauki about circumstances on a marae that captures these sentiments; “Te amorangi ki mua, te hapai o ki muri – the leader in the front of the house, workers behind the scenes”.  Leaders leading and workers in support to ensure things run smoothly.  Good organisations thrive and are successful when leaders and their followers work in accord.  Without one, everything will fail.

With those words in mind I want to conclude by again thanking General Jones for his sterling service to New Zealand and his leadership of the Defence Force over the past three years; and I congratulate and welcome General Keating into his new role as Chief of Defence Force.  No reira, kia ora, kia kaha ake ake.