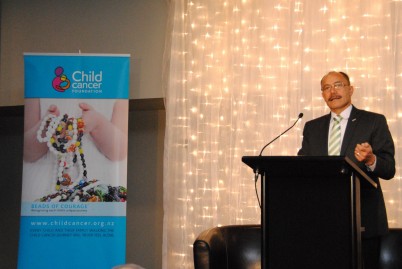 Thank you for inviting Janine and me to this charity dinner for the Waikato branch of the Child Cancer Foundation.  We are delighted to be able to lend our support for this worthy cause.

Last month we were involved in National Volunteer Week and last week was Māori Language Week.  So I thought I’d begin with a Māori whakatauki or proverb that ties both together, and links to my comments this evening.  It goes: “Ehara taku toa i te toa takitahi, engari he toa takitini.”

The proverb literally translates as “success is not mine alone, rather it is the success of many”.  More widely it speaks of the humility and inconsequence of an individual’s success and the power that is harnessed when we pull together for a cause.

New Zealanders are renowned for our propensity for working together – in teams, on committees.  And it’s easy to see where that came from.  Traditionally, Māori worked collectively to do everything from gathering food to building great waka.  And when British settlers arrived they often found themselves in the back of beyond without any amenities.  “Do it yourself” was not only a way of life, it was an absolute necessity in order to survive.

However, forming a committee, organising a working bee or community action became a common pattern of providing community amenities.  In the 20th century this was reinforced by the heavy involvement of New Zealanders in service groups such as Rotary, Lions and Jaycees which boomed after the Second World War.  Women’s organisations also flourished – with a very wide range of groups involved in community projects and often national and international projects as well.

New Zealand women have a very strong background in organising groups for good causes.  The most obvious, of course, is the suffrage movement of the early 1890s, largely led by the Women’s Christian Temperance Union.

It is amazing to think that the suffrage petition of 1893 had more than 30,000 signatures of women 21 and over.  In a time when communication and transportation were very difficult, it took real organisation to gather the signatures of about a quarter of all adult women from total population of less than a million!  The Electoral Bill was passed later that year.  On 19 September we mark 120 years since New Zealand women became the first in the world to have the right to vote in national elections.

In the 21st century, membership of service groups, and indeed of groups in general, has declined.  Nonetheless, New Zealanders are keen to volunteer their time.  More than one million New Zealanders are actively involved in volunteer work, both informally within their communities and through the more than 97,000 organisations that make up our country’s community and voluntary sector.  And, when our children are under threat from illness or disability, New Zealanders will always make an enormous voluntary effort.

When I was making preparations for this evening, I asked my staff to find out whether there was something distinctive about the Foundation’s Waikato branch.  They came back with the message that the branch is known for its innovative approach to helping children with cancer, and their families.

I heard that volunteers were the backbone of the organisation, which has only two fulltime and one part-time staff members.  I heard that many of these volunteers are working fulltime and have a number of children and a sick child.  Yet they still make the time – and somehow find the energy – to reach out to others in the same situation.

I also heard that the funds the Foundation raises are helping families in the most practical ways – for example, paying for food and phone bills when they have to spend an extended time in Auckland while their children are in the Starship Hospital; for scholarships for children who have missed school and for parents who need to retrain after having spent a significant amount of time nursing their children; for providing holidays in the CCF houses in Queenstown and Tāupo – and I hear there is a new house being fitted out in Rotorua.

In assessing the organisations and events that we spend time with, Janine and I have a check list with the acronym SERVE - Service, Enterprise, Rangatahi, Volunteering and Excellence.  These are the themes we put our stress on in our work – and the Child Cancer Foundation clearly lives all of these with abundance.  Most of all, it cares for our most treasured taonga – our children.

I congratulate everyone involved in the Child Cancer Foundation Waikato branch for your work and for organising this fantastic event.  I will close with the whakatauki that I opened with - “Ehara taku toa i te toa takitahi, engari he toa takitini.”  The success of this branch past, present and in the future is certainly in the hands of many.  We wish you all the best for your future fundraising to help the children of the Waikato and their families.