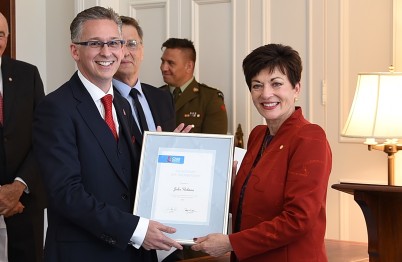 I’m delighted to be welcome you here today for this award presentation.

Every year thousands of New Zealanders lives are touched by the work of the Child Cancer Foundation. The comfort and support your organisation offers is a welcome helping hand at what is an incredibly difficult time.

It’s hard for us to see our loved ones facing up to cancer and it’s even harder when that patient is a young child. A parent’s role is to keep their child safe from harm and the impotency felt in the face of such a serious illness must be immense. The Child Cancer Foundation’s commitment to providing practical and emotional support for children with cancer and their families has helped a shine some light into what can be very dark room.

This work doesn’t happen by magic – there are no elves involved or magic wands. Rather it’s people from all walks of life, from all over New Zealand, who give up their time, or offer their skills and expertise to help the Child Cancer Foundation achieve its goals.

The Child Cancer Foundation is one of the many New Zealand organisations that couldn’t do what it does without the help of volunteers. It is their generosity of spirit and willingness to give of themselves that makes the Child Cancer Foundation’s programme of work possible and also provides hope and support to those who are dealing with child cancer.

Those who volunteer offer up a very precious gift – themselves. Their reward is not monetary, rather it’s the feeling of making a difference and of being part of something bigger. Volunteers place others above themselves and do so willingly.

The ways that volunteers can contribute are many and today we are recognising John Robson for his achievements in governance and leadership of the Child Cancer Foundation. John’s financial acumen and leadership skills helped steer the organisation through some tough times and his leadership has made your organisation more robust and professional. He has not been content to confine himself solely to balance sheets and boardrooms but has been a strong advocate for parents and continues to be an active fundraiser. This has all been done in a completely voluntary capacity, alongside his work and family commitments.

John’s skill and talent is held in high regard by those who have worked with him over the last 15 years and their personal testimony reflects that. Pat Wilkes is speaking next and he has already indicated to me his admiration for John’s attention to detail and diligence. He also praises John’s commitment to getting the communication right and keeping people informed.

These are the qualities and attributes that enabled John to bring about change while still retaining the respect of those around him. As Mike ‘Snow’ Durkin told us “CCF is lucky that they were John Robson’s chosen charity.”

John, I congratulate you on your well-deserved honorary life membership. It is a fitting acknowledgement of a valuable contribution and your commitment is a great example to others. I know your involvement with CCF is ongoing and I’m sure that relationship will continue to be rewarding for all involved.

I would now invite Board Vice Chair Pat Wilkes to respond.

I am truly humbled to have the honour of giving this citation to our friend, supporter and advocate – John Robson. John’s time with CCF spans more than 15 years, and is continuing, much to CCF’s delight. He is a quietly spoken person with a strong sense of family and a measured determination that belies his soft demeanour.

John was introduced to CCF through his boss at the time, Denis Kirkcaldie, who was Chair of CCF when John joined the National Bank after immigrating to New Zealand from the UK in 2002.

John initially volunteered to ‘shake a bucket’ but Denis suggested that his talents might be better used supporting the Central Division with their finances.

John joined the Central Division Committee around 2004 and in 2007 became the Division Chair which also afforded him a seat on the National Board.

He remained Chair of the Central Division Board until mid-2009 and during that time became Deputy Chair of the National Board.

While Chair he oversaw a particularly difficult financial time for CCF as a result of the Global Financial Crisis, which saw many of CCF’s traditional funding sources retreat. John’s skill and common sense navigated the organisation through that period and saw CCF in remarkable financial shape when he stood down as chair in 2014. During his time as chair, John also initiated a Governance Review that has seen the Board move to an advanced level of professionalism and skill, possibly one of the best examples in the not for profit sector.

While part of the Central Division, and continuing during his time on the National Board, John was intimately involved with the Parent Focus Group that was established to discuss child cancer services at Wellington Hospital. He was the voice of the parents, and a very strong advocate, on the Parent Task Group that worked alongside CCDHB reviewing and recommending the long-term strategy and requirements for future child cancer services in Wellington. This was a stressful and time-consuming time for all parties and while the outcome wasn’t what the parents wanted in this region John continued to work for their wishes. He remained at all times a staunch advocate and supporter of parents and families in the region.

John is regarded within the CCF “family” as a compassionate yet financially astute and commercial person, He is blessed with a rare skill to resolve the inevitable disputes which occur in voluntary organisations, and has never shied from the need to deal to such matters in a timely manner.

John is still an active fundraiser for CCF. He personally takes part in the Annual Appeal in Wellington and has encouraged the participation of employees at his company in CCF’s fundraising activities.

CCF is blessed and fortunate to have John as a leader, role model and committed supporter for the past 15 years. He has been an immensely valuable servant of the organisation and is universally respected.