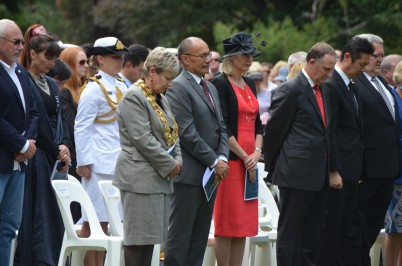 Distinguished people gathered,
On this day of commemoration, greetings,
Ngai Tahu people, Te Maire,
Thank you for the blessing.
My warm greetings to us all gathered.

I specifically acknowledge: The Rt Hon John Key, Prime Minister of New Zealand; Hon Gerry Brownlee, Minister for Canterbury Earthquake Recovery; Members of the Diplomatic Corps; Andrew Little, Leader of the Opposition; Members of Parliament; Her Worship Hon Lianne Dalziel, His Worship Kelvin Coe, and His Worship Davis Ayers, Mayors of Christchurch, Selwyn District Council and Waimakariri District Council respectively; Father Rick Loughnan, Administrator of the Catholic Diocese of Christchurch; and people who were bereaved or suffered injury during the earthquake on the 22nd of February 2011 - tēnā koutou katoa.

It is also my honour to pass on Her Majesty Queen Elizabeth II’s warm good wishes to the people of Christchurch, and to say that Her Majesty’s thoughts are with us as we gather to commemorate this sad anniversary.

Noting the recent severe earthquake, His Royal Highness The Prince of Wales wrote to the Mayor of Christchurch to express his concerned good wishes and went on to say "I know the people of Christchurch are incredibly resilient, and I am sure that you will continue to draw comfort from the terrific community spirit and kindness you have shown for each other these past years.  You are all very much in our special thoughts and prayers at this time".

The past five years have been a journey of sorts for us all.  Arriving here today is, I appreciate, a difficult time for many people in Christchurch and the wider Canterbury region.  This is particularly so given the 5.7 magnitude earthquake just over a week ago that reminded us all that Christchurch – and indeed much of New Zealand – is prone to seismic activity.

Tarawera, Napier, Inangahua, Edgecumbe and Christchurch all have a place in our nation’s story.

When my predecessor, Sir Anand Satyanand, spoke at the Memorial Service on the 18th of March 2011 he mentioned the messages he had received from world leaders, including Her Majesty Queen Elizabeth II – the sense of shock, the expressions of heartfelt condolences and the sentiment that the tragedy was not New Zealand’s alone because citizens from many countries had lost their lives or been injured.

Today, those sentiments resonate as we remember the 185 people whose lives were cut tragically short.  We acknowledge that their loss has left a gap in the lives of their family and friends; and in their schools, their workplaces and their communities.

We recall the ordered streets and gracious buildings of a city renowned for its style and substance.  We recall how, in an instant, that physical landscape was shattered.

We remember how television and radio – and social media – meant that the whole world was able to witness the devastation, the dazed survivors and frantic rescue efforts.  We remember how those same media mobilised relief efforts from near and far.

In the weeks and years that followed, Christchurch people were faced with cordons and demolitions – and the huge challenge of rebuilding their city.  At the same time the psychological impact of trauma was taking its toll.

I appreciate that for many, the intervening years have been an exhausting struggle.  There has been financial hardship, agonising stress, and years of frustration.  My hope is that the end of this period is fast approaching, and that these people will be able to carry on with their lives with renewed optimism and energy.

Meanwhile, a new and stronger city is taking shape.  Each time I come to Christchurch I have been able to witness some of the change and I look forward to seeing what is yet to come.

Last year I had the opportunity to acknowledge and thank members of our emergency services and medical staff.  Five years ago today, they put their own lives in significant danger in order to rescue others.

Today I want to take this opportunity to acknowledge the unsung and countless acts of kindness, generosity and support offered by Cantabrians to their neighbours and fellow citizens, on that day, and subsequently.

I also want to acknowledge the creativity and commitment of those who have worked hard to make Christchurch a prosperous, lively city again.  I thank the people who have helped those in need, those working to repair infrastructure, the entrepreneurs who are starting up businesses or developing new projects, the Gap Filler live-wires who used arts and entertainment to lure people out into the streets again to enjoy life and gain respite from their worries.

There is still some way to go until Christchurch is truly reborn again.  There is some time to go before there will be a generation of Cantabrians who do not have the earthquake or its aftermath as part of their memory.

A Memorial to those who died will be a permanent reminder.  Parents and grandparents will bear witness to the shock and despair, and how life eventually moved on, over time, towards a new normality.  And they will celebrate the rebirth of a city – a wā kāinga – a place that they love and a place to call home.

On behalf of your fellow New Zealanders, I wish you all the very best as you continue on your journey.