Circa Event for "All Our Sons" 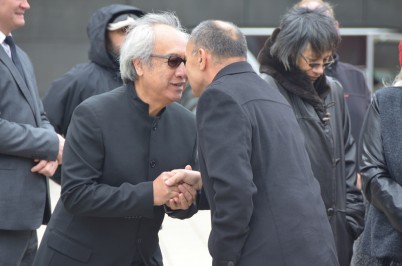 Thank you for inviting me and Janine here today.

I’m delighted to have this opportunity to acknowledge Circa Theatre and Taki Rua for this unique collaboration – connecting culture, the arts, and cultures, peoples, and connecting with our shared heritage – past with the present, to better understand our future.  It’s also an elegant way to thank Witi for telling a story that needs to be told.

In the 1980s Maurice Shadbolt’s play ‘Once on Chunuk Bair’ showed how our storytellers could bring our military history to life – and fix it into our national consciousness.

Now, it’s Witi’s turn to do the same.  With ‘All Our Sons’, we will now get the Māori dimension of our first experience of fighting in a global war.

A hundred years ago, for the very first time, a Māori contingent of soldiers fought overseas under the New Zealand flag.  It was less than 50 years since the end of the New Zealand Wars.  They were the soldiers of the Native Contingent - Te Hokowhitu-a-Tu.

The Maori Contingent arrived at Gallipoli in July 1915.  By September 1915, after the ferocious fighting of the August offensive and the attack on Hill 60, only 60 of the 476 men who had arrived with the Contingent remained at Gallipoli.

The New Zealand Pioneer Battalion which was formed in 1916 included the remnants of the original Maori Contingent, Maori reinforcements from Aotearoa, Pākehā soldiers of the Otago Mounted Rifles, along with 170 Pacific Islanders - 125 from Niue and 45 from Rarotonga.

In France, the Pioneer Battalion was held in awe for its work in support of the New Zealand Division.  The Pioneers had the distinction of providing the only trench-raiding party equipped with mere.

In all, 2,227 Maori and 458 Pacific Islanders serviced with the unit in its various guises; 336 of them died on active service and 734 were wounded.

The stories of the New Zealand (Māori) Pioneer Battalion are mostly untold.  They deserve telling, as has been the case with those of the 28th Māori Battalion’s from the Second World War.

Witi, our first Māori novelist, has the mana to take on this task.  Thank you Witi, for using your talents to honour all those brave young men.

I, like many other New Zealanders, have a special interest in our stories.  My two grandfathers were amongst the men who joined the Māori Contingent.  One served at Gallipoli and then went on to serve on the Western Front.  My other koroua also served on the Western Front.  My grand-uncle lies in a grave in Belgium.  So I’m personally very pleased ‘All Our Sons’ covers both of those theatres of war – and I’m very much looking forward to seeing the play.

When the play opens in November, all of you involved in its production and presentation may well want to reflect on the words that their padre, Reverend Henare Te Wainohu, said to the men of Te Hokowitu-a-Tu on the night of their first battle.  He said: 'remember you have the mana, the honour and the good name of the Maori people in your keeping this night'.