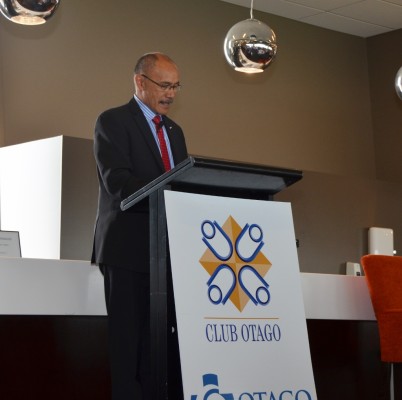 Thank you for inviting Janine and me to this luncheon.  I understand that it was advertised as an opportunity to quiz me on my views on our flag and on how best to combat ISIS.

Well you may be here under false pretences!  I don’t intend speaking about those two topics specifically, so don’t hold your breath!  I’d rather leave any commentary on those particular subjects where they properly lie, with current experts.

What I will say is that it is important to participate in democratic processes.  And as for the flag topic, I quote these lines from Sir Edward Hamley:
“A moth eaten rag, on a worm eaten pole, it doesn’t look likely to stir a man’s soul.  Tis the deeds that were done, ‘neath the moth eaten rag, when the pole was a staff and the rag was a flag”.

What I intend to talk about is my current role – something I am a bit of an expert in - and how the work of Club Otago and the Otago Medical Research Foundation align with what I am seeking to promote during my term as the Governor-General.

So first, to my role.  For those of you who are not entirely sure what it entails, the simplest way to explain it is to think of the different functions I perform.

There is a constitutional function.  I am the Queen’s representative in New Zealand, and exercise many of her powers and authorities.  This function provides constitutional authority and continuity, and is the main reason for the existence of my role.

There is a ceremonial function.  I participate in public ceremonies as the individual who represents the State – opening new sessions of Parliament, welcoming visiting Heads of State and accepting the credentials of new ambassadors and high commissioners to New Zealand, and celebrating New Zealanders through investitures and their like.

Janine and I have hosted several Heads of State – earlier this week the President of Singapore.  We’ve also hosted members of the Royal Family.  We are looking forward to the second visit of the Prince of Wales and Duchess of Cornwall to New Zealand, starting next Wednesday.

Janine and I also have a community leadership function.

Through community leadership we support over 170 patronages.  We lend our name and station to them.  We host them at functions at Government House in Wellington or Auckland, attend their events elsewhere and generally help to profile worthwhile charities and endeavours.  Janine and I have criss-crossed the country in the last four years during regional visits, and we have been privileged to meet an incredible cross-section of New Zealanders.

There is an international dimension to my role.

My predecessor, Dame Silvia Cartwright described it as “promoting New Zealand’s identity and sovereignty as an independent nation”.  It is a function that I was somewhat familiar with prior to coming to Government House, and one which I find fascinating.

Highlights for me would be visiting the Vatican and meeting Pope Francis, presenting New Zealand’s opening statement at the Thirteenth Session of the United Nations Permanent Forum on Indigenous Issues in New York, representing New Zealand at commemorations of the service of our men and women in the two World Wars – at Gallipoli, Normandy and Monte Cassino, supporting our athletes at the Olympic and Commonwealth Games, and learning how New Zealand’s actions in the League of Nations in the 1930s and the United Nations in the 1990s helped win votes for our candidacy for a non-permanent seat on the UN Security Council last year.

And so to the second part of my talk – how, what you are doing aligns with what I’m seeking to achieve.  Each year of my term has had a theme to guide our engagements – 2012 – Queen’s Jubilee, 2013 – celebrating women, 2014 – families and peace, 2015 nationhood and next year will be science and innovation looking to the future.

At Government House, we are developing a visit programme for next year which will see us visit all of our universities and some research institutes.  My programme team is canvasing the universities to see what they would like us to view.  Just last week Janine and I visited the Malaghan Institute in Wellington.  We were fascinated to hear about the research they are doing around nutrition and immunology.  I’m looking forward to visiting Otago University next May.

The purpose of our visits is to lend a profile to some of the research being done and where appropriate to promote our New Zealand research with the people I meet.  For example, when I was in the Oman and Kuwait I learned of the high incidence of diabetes there.  I encouraged senior leaders there to look at the work Professor Bob Elliott and Living Cells Technologies were doing in that field.

You may have already gathered from what I have said that Governors-General put their own stamp on the role.  Over the last four years, I’ve been guided by an acronym of SERVE – Service, Excellence, Rangatahi – or Youth, Volunteering and Enterprise.

What we have tried to do is bring some focus to celebrating and promoting New Zealanders and our organisations that reflect these themes in their work.

Club Otago and the Otago Medical Research Foundation are doing things that I think warrant acknowledgement, celebration and promotion.  Your commitment to supporting research into health and medical issues shows a spirit of service to public good.

A generation ago, our relatives’ lives were regularly cut short by diseases that are now treatable or preventable.  Investing in medical research and knowing that your contribution, your service, is making “a difference” for New Zealanders is something I want to acknowledge.

Nationhood is about what connects us today as much as our shared heritage.  In a year when we are marking important events in our country’s history, our nationhood and the legacy of extraordinary people, I want to note the extraordinary ambition that the people of this region showed 130 years ago, when the world’s southernmost medical school was established here, less than thirty years after Dunedin’s European settlers first arrived.

All of New Zealand has benefited from the thousands of graduates that have studied at the Otago Medical School and those, like Sir Archibald McIndoe and Fred Hollows, who have established an international profile for their work and our nation.

Nationhood is also about celebrating the diversity of our different regions and communities, the special character that sets them apart.  Dunedin’s stunning heritage buildings, fine educational tradition and breath taking scenery, it seems to me are distinguishing features of this city and its tradition of working together for the public good.

Working for the public good is apparent in what Club Otago does in supporting the Otago Medical Research Foundation’s research into medical and health issues – and thereby helping to maintain Dunedin’s place as a centre of medical education and entrepreneurial activity.

I see a long future for your work and partnership, because as Einstein said, “The important thing is to never stop questioning” – and as long as medical scientists are asking why people develop conditions and why treatment isn’t working, there will be a need for Club Otago and the Otago Medical Research Foundation.