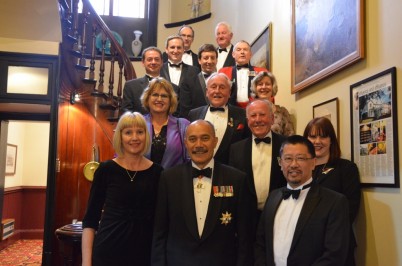 Thank you very much for inviting Janine and me here this evening.  We appreciated your southern hospitality on our last visit and we’re looking forward to catching up with old acquaintances and making new connections.

When we return to Dunedin, the warm welcome that we receive calls to mind the words penned by Hone Tuwhare about its beautiful harbour:

A taniwha once tried to break out of the harbour for the open sea. He failed. He is lonely. From the top of the mountain nearby he calls to you: Haere mai, haere mai, welcome home, traveller.

This region obviously had great charms for Hone, a man of the far north – and although this is not home for us, we do feel like those travellers returning to a special place.

Last year I visited Hone’s crib.  I am very pleased that it will be retained for future writers to use.

When I first became Governor-General, I was essentially glimpsing it through the lens of a Chief of Defence Force.  I had observed the role and had occasions in the company of previous Governors-General, including Sir Michael Hardie Boys, Dame Sylvia Cartwright, and latterly with Sir Anand Satyanand.  So while I had some sense of the role, what I found was that the reality was rather more far-reaching.

In particular, I have been surprised about the opportunities to represent New Zealand overseas.  And so I thought I’d mention some of what we have done in the recent past representing the people of New Zealand.  It is a fascinating and rewarding part of the role.

Overseas, I have welcomed the prospect of promoting New Zealand and New Zealanders in all kinds of settings, from Addis Ababa to Ho Chi Minh City, from Angkor Wat to the Vatican and New York to Shanghai.

Elsewhere Janine and I have seen research or business that is being done, either by New Zealanders or with a New Zealand connection.  We viewed research to improve child neurological health and well-being in Singapore at KK Women’s and Children’s Hospital and at the South Australian Health and Medical Research Institute (SAHMRI) that involves Waikato Hospital and Sir Peter Gluckman.

Tonight, I thought I’d talk more specifically what we have done on your behalf, representing New Zealand during visits in July and August.  Janine and I made State visits to Tonga, Singapore, China and Turkey.  Three of them had specific purposes and were timed accordingly.  In Tonga, I represented New Zealand at the coronation of HM King Tupou VI; my State Visit to Singapore formed part of New Zealand’s observance of that country’s 50th anniversary of independence; and in Turkey I joined in the centenary commemorations of the August offensive during the Gallipoli campaign.  Our State Visit to China was the exception in not having a specific timing, and indeed it was only quite late that the planning coalesced around dates in July.

The Coronation itself (on Saturday 4 July), was a highly formal and symbolic ceremony.  Janine and I were conscious of the great significance that the coronation - and the institution of the monarchy itself - had for the Tongan people.  Our Tongan hosts deserve a great deal of credit for the way they handled a formidable logistical challenge.  We saw Tonga at its best.

Our State Visit to Singapore was my second time in that country this year, following my visit in March to represent New Zealand at Lee Kuan Yew’s funeral.  Our programme included a very good combination of formal state occasions and less formal engagements aimed at capturing the breadth and character of the bilateral relationship.  After orchid-naming and tree-planting ceremonies at the Singapore Botanic Gardens, Janine and I were formally welcomed by President Tan and Mrs Tan at their residence, the Istana.  I had courtesy calls with the President and with Prime Minister Lee Hsien Loong, while Janine called on Mrs Tan.

Another aspect of my visit to Singapore was to engage with the New Zealand community there.  The first item in the visit programme was to the Kranji War Memorial and Cemetery, where Janine and I laid a wreath and then met NZDF personnel and families.  Less formally, I participated in a roundtable of New Zealand Small and Medium Business leaders operating in Singapore, and joined with them in a discussion of the critical considerations and challenges they face in that market.

Our visit to China was a reciprocation of the visit by President Xi Jinping to New Zealand in November 2014.  It was structured around visits to three locations:  Shanghai, China’s commercial centre; Beijing, the political focal point; and Harbin, in the north-eastern province of Heilongjiang, a growing destination for New Zealand trade.  Together, these three destinations provided a cross-section of our bi-lateral relationship’s breadth and diversity and gave us the opportunity to engage with a range of senior Chinese leaders.

The senior Chinese leadership, especially President Xi and Premier Li, spoke of the breadth of the relationship, and of the importance of both countries’ willingness to seek new directions and opportunities for development of our Comprehensive Strategic Partnership.

Our visit to Turkey had two main purposes.  The first was to represent New Zealand at commemorations of the August offensive in 1915.  The second purpose was to call on the President and other senior members of the Turkish government.

For Janine and me, and I dare say for all the other New Zealanders, the highlight of the commemorative programme was the service at Chunuk Bair.  The site is an intimate one, and the sense of solemn emotion ran strongly for all the New Zealanders present.  I gave an address and Janine and I laid a wreath.  Willie Apiata VC also addressed the gathering in recalling Cyril Bassett, the only New Zealander to be awarded the Victoria Cross at Gallipoli.  Then, for the first time in many years at Gallipoli, a haka was performed officially, and was picked up in the local Turkish press with a mixture of enthusiasm and curiosity.

Our visit to Turkey reinforced my sense of the goodwill that exists between our two countries and governments, and the firm underpinning that goodwill has in the shared history of the Gallipoli campaign.  Turkey remains an influential country within its region, with many insights that are helpful to us.

In all four countries, my hosts were impeccable in sharing their views candidly and their time generously.  They all sought to emphasise areas where there are opportunities to broaden and deepen our engagement.

The four visits provided opportunities to reinforce New Zealand’s credentials as a long-standing and committed partner.  I was able to engage decision-makers, to view research and commercial projects where New Zealand or New Zealanders are involved, and to meet expatriate New Zealanders.  Janine’s participation and programme complemented my own and was welcomed by all of our hosts.

This year, the focus has been on major anniversaries of events that have shaped our nation – from the 175th anniversary of the signing of the Treaty of Waitangi, 150 years since Wellington became the Capital, and the centenary of the Anzac landings.

With our heritage so much at the forefront of our minds, it’s only appropriate that we should come to Dunedin, where there is such a pervasive awareness of heritage and tradition.

Earlier today we had lunch with members of Club Otago and acknowledged the role they play in supporting Dunedin’s long tradition of medical excellence and research.

We also visited Columba College to share their centennial celebrations – and now we are in this wonderful heritage building, celebrating the continuity, fellowship and tradition that the Dunedin Club represents for you all.

Thank you for this wonderful food, wine and company.  It is much appreciated.  As Virginia Woolf so wisely said, "One cannot think well, love well, sleep well, if one has not dined well."