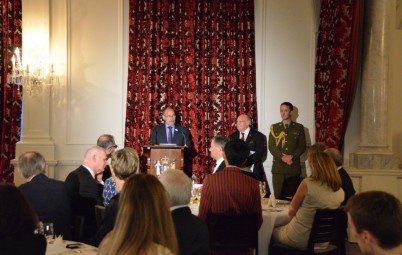 I also want to acknowledge broadcasters and outstanding science communicators Kim Hill and Veronika Meduna who are with us tonight – for their contribution to increased public interest in matters of science and research.

It is a pleasure for Janine and me to welcome you all to Government House this evening.  One of the privileges I have as the Governor-General is the opportunity to acknowledge the achievements of New Zealanders.  Tonight we are doing that.  We are celebrating some of our most able young science communicators, and the late Sir Paul Callaghan a visionary scientific leader.

Sir Paul’s desire for New Zealand to be “the most beautiful, stimulating and exciting place in the world in which to live” speaks to his passion for our country and his belief in science being a key driver in creating the basis for home grown world-class industries.

The 12 young New Zealanders who have participated in the Eureka! Symposium show that there is cause to be optimistic that the next generation have the potential, the passion and the power to make Paul’s dream happen.

Imagining what could be is one thing, but having the ability to explain an idea in a clear and appealing way can move something from the realms of the imagination to a reality.  Albert Einstein said “If you can’t explain something simply, you don’t understand it well”.  The young scientists who are with us tonight have demonstrated that they understand what they are talking about – well!

I would note that clear and compelling language also helps when it comes to getting support for a proposal.  As the American scientist Dr Wyn Jennings said “The grant proposals that are well written are usually the ones that get the cheques!”

New Zealanders have a proud record of scientific achievement and innovation.  People like Sir Ernest Rutherford and Alan McDiarmid stand with Sir Paul Callaghan as pioneers and world leaders in science.

They were also great communicators.  Rutherford’s speeches have been described as “punchy, inspirational and visionary”.

Rutherford’s excitement and passion are evident in a speech he gave in 1936 where he described a major breakthrough in his thinking on atomic energy, when he said:

It was quite the most incredible event that has ever happened to me in my life. It was almost as incredible as if you fired a 15-inch shell at a piece of tissue paper and it came back and hit you…It was then that I had the idea of an atom with a minute massive centre carrying a charge.

Now even I can relate to that statement.  Rutherford shows it is possible to be instructive, to make complex ideas accessible – and to convey their significance in such a vivid way that a listener can only be inspired by his discoveries.

We might think that the Number-8 fencing-wire mentality is hardwired into the national psyche.  That shouldnot be taken as a given.  Even in 1925, Rutherford was advocating a fresh approach when he said: “If we are to hold our own in the struggle of tomorrow it will be by applied science.”   Contemporary innovation has to be based on well-informed scientific and technological understanding and research.

I will close my remarks this evening by first commending the Rotary Club of Wellington for establishing these Eureka! Awards.  They are a fantastic way of encouraging enthusing and exciting young New Zealanders about science.  We need to ensure the coming generations have early opportunities to test science so that New Zealand continues to provide scientists of the calibre and passion of our science heroes of the past.

Finally, congratulations to all tonight’s finalists.  I look forward to hearing more about your work and presenting the Highly Commended and Premier Awards later this evening.