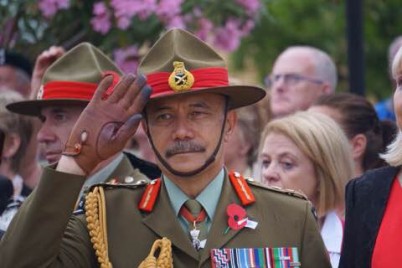 People of New Zealand, greetings again.
My warm greetings to the distinguished people of Galatas, of Crete and to the representatives of Australia, of the United Kingdom, and elsewhere, and to all who are gathered for this commemoration.

We are particularly privileged to be joined by four New Zealand veterans from the Battle of Greece and Crete: Mr Bill Bristow and Mr Roye Hammond of the 18th Battalion; Mr Malcolm Coughlan of the 19th Battalion; and Mr Anthony Madden of the 4th Reserve Motor Transport Company.

It is their deeds, and those of their companions, as well as the deeds of our Allied and Greek partners that we commemorated today.

It is a great privilege for me to represent New Zealanders at this 75th anniversary commemoration of the Battle of Crete.  It is a battle described by General Bernard Freyberg, the Allied Commander on Crete, as ‘the hardest and most savage campaign of the New Zealand Division’.

75 years ago, on the morning of the 20th of May 1941, the appearance of aircraft, gliders, and then Fallschem-jager-parachutists-in the sky heralded the battle for Crete.

Private Walter Gibbons of the 23rd Battalion recounted:
Our OC simply said, ‘This is for real boys, put your bayonets on, it’s either you or them’.

Over the course of 12 days, it claimed the lives of more than 1700 allied troops, many Cretan citizens, and also many German personnel.

This week we have come together with our Allies – from Australia, the United Kingdom and Greece – and with our former enemy, Germany, to honour all those who lost their lives, on both sides, as well as the thousands of Cretan civilians who perished.

General Freyberg had this to say about how the New Zealand contribution on Crete would be remembered in the history books:

“History will do justice to the part they played. It will be belated justice. Gallantry in failure, no matter how great it may be, has tardy recognition.”

Out-gunned and eventually outnumbered, the men and women defending Crete performed untold acts of courage, heroism, and compassion: some remembered, some lost with the passage of time.

It was on Crete that the remarkable acts of courage of Charles Upham and Clive Hulme were recognised with the award of our highest military honour, the Victoria Cross.

It was here that Howard Kippenberger, one of our most distinguished and effective commanders, and who was to later command the New Zealand Division, earned his first Distinguished Service Order.

Yesterday’s unveiling of the 42nd Street memorial reminded us of another individual whose name will not be forgotten: Private Hemara Aupouri, a bren-gunner with the 28th Māori Battalion.

When the orders were given to charge the German 141st Mountain Regiment, Aupouri got to his feet and with the haka: Ka mate! Ka Mate! Ka ora! Ka Ora! – incited the men of his battalion and their 2/7 Battalion Australian mates to unleash a fierce bayonet charge, the ferocity of which overwhelmed their German foe – thereby keeping open the passage for evacuation via the Southern Coast.

In 1941, it must have seemed extraordinary to the people of Crete that New Zealand and Australian troops – from the other side of the world – together with British troops - would be alongside them fighting in defence of their island and their liberty.

Equally, for the Allied forces left behind after the evacuation, it must have seemed extraordinary that the local people were prepared to shelter them from the enemy, despite the certain threat of deadly reprisals.

Thus was born an enduring relationship between the peoples of our countries, based on shared hardship, mutual respect, and affection.

75 years after the conflict, the scars on the landscape have healed on this beautiful island, and the olive trees and the vineyards are flourishing again.

As we focus on the centennial commemorations for the First World War, it is all the more important to ensure those who fought in a more recent war, who are still amongst us, are not forgotten.

Their example continues to inspire the young men and women of today’s Defence Force as they work to enhance safety and security in the world’s conflict zones.

My hope is that the many young New Zealanders who make the pilgrimage to Gallipoli will also be drawn here to remember our tipuna – our ancestors - in years to come, and to keep alive our ties with our Cretan friends.

By gathering together to commemorate, we keep alive the memory of all those who served and suffered here – and we commit to our collective memory the realities and the human cost of war.

To the descendants of our warriors – thank you for coming here.  With your presence, and your tribute to your forebears, you demonstrate a deep commitment to keeping them – and their deeds – alive in our collective memory.

In closing I will quote the words of Cyril Crosland, an Army Service Corps driver and prisoner of war, who spoke many years later of the war’s painful legacy:

Crosland’s words emphasise that we best honour those who served in war by continuing to work in the cause of peace.  In this way, their legacy can guide us to a better future.

Ka maumahara tonu tātou ki a rātou – We will remember them.