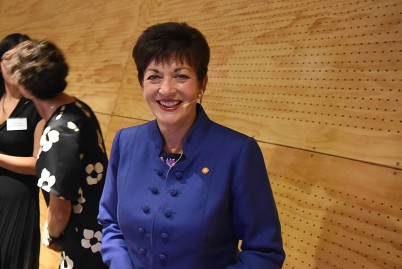 To our women, our matriarchs of the world, you are leaders in the business world.

Welcome to this gathering.

Distinguished guests, ladies and gentlemen, warm greetings to you all as we mark International Women’s Day 2017.

All around the world, people are joining together to celebrate the social, cultural and political achievements of women.

And in this country, we do have a lot to celebrate. Nearly 125 years on from being the first country in the world to give women the vote, we have become one of the most gender-equal nations in the world. Each year the World Economic Forum measures the economic participation, educational attainment, political empowerment and health and survival of women. Our ninth place in the 2016 Global Gender Gap Index puts us ahead of many countries including the UK, USA, Australia and Canada in those areas.

Women have the freedom to participate in every sphere of New Zealand life – education, sport, politics, religion, business. Our right to do this is protected by law and more importantly it is well accepted in our society. It’s a great time, and a great place, to be a woman.

The idea that “Girls Can Do Anything” became part of our national consciousness with the so called second wave of feminism – the Women's Liberation movement – back in the 1970s. I know it gave me the impetus to study law at Victoria in the 1970s, where in my first week, I was astonished and inspired by the visit of Germaine Greer, who celebrated International Women's Day in NZ in 1972. She was exciting – bold and articulate.

Her powerful and explosive address in the Auckland Town Hall culminated in her arrest and conviction for the use of obscene and indecent language. But that was incidental. Her visit was a call to arms and as a 17 year old girl from Hamilton Girls High School, I felt empowered.

Law was quite different from the traditional occupations that young women were typically steered into back then. Like teaching, for example. My parents were both teachers and I was keen to spread my wings and head in a different direction.

My recollection is that only around 10% of my first year law class at Vic were female and we felt like trailblazers. It was an exciting and intellectually stimulating time to be at university and it seemed that the world was changing fast. The Women's Liberation movement seemed to me to be powerful and unstoppable.

Unfortunately, when I graduated, I discovered that local law firms hadn’t received the ‘Girls Can Do Anything’ memo and didn't seem to be impressed with the ideals of the women's movement. For various reasons, which on reflection were somewhat spurious, they declined to hire me.

What I did get offered, was a junior lectureship at the Law School. Teaching, in other words! However, it gave me the opportunity to complete my LLM degree, which ultimately led to an offer to join a private law practice. I was on my way.

This story, for me, in a small way illustrates the theme for International Women’s Day 2017 - #BeBoldforChange. Sometimes being bold involves grand gestures and large-scale organising. Think of the suffragists in the early 1890s who went from door to door and town to town gathering thousands of signatures on the various Women’s Franchise petitions. Their boldness and assertiveness helped to create a legislative change that altered the political face of our country forever.

For me and my female colleagues in the 1980s and 1990s, being bold meant continuing to pursue our paths in the face of obstacles. Often, we had to work hard to get in the door. It wasn’t easy and there were many who doubted our abilities. Being a typical Kiwi woman, I adapted my style, bit my lip and simply got on with it. I had learned the rules of Rugby and cricket, thanks to my Father, so I could converse with my male colleagues and I guess I got used to working in a male-dominated environment.

From time to time I was shocked by displays of conscious discrimination – from unlikely sources. I have a very clear memory of a shareholder – an older woman - publicly questioning my suitability and aptitude as a director at a shareholders meeting in the 1990s, apparently on the basis of my being female.I really didn't know what to say and so I was grateful for the support of the Chair of the Board – a man - who spoke up in my defence.

It was an interesting experience and a reminder that the journey towards a more gender equal workplace was never simply an issue of male versus female. There were women who weren’t comfortable with the idea of women lawyers, doctors and engineers, while there were men who were vocal champions of gender equality.

The diversity of the 21st century workplace is a tribute to all those who looked past gender and recognised the benefits that accrue to everyone from more equal participation in the workforce.

In the 1990’s it felt as though we had broken through sufficient glass ceilings – in political, professional, private and public sectors. That the battle had been won. But looking back I realise that trail blazing by a few individuals is not enough to change a culture. In many ways we remain a patriarchal society. At least gender inequality is now recognised and fewer people seek to deny it.

While we can and should celebrate our successes, despite the many campaigns fought and won, we can still all point to evidence of gender inequity. Some forty years on from my university experiences, there are still issues that need to be worked on.

Women are still far more likely to be the main caregivers for children and elderly relatives. It can be challenging to juggle these demands with work. Some organisations are exploring new ways of working. Job sharing, flexible working hours, and the ability to work from different locations are some examples of arrangements that support people to contribute in the workplace.

In some places, there’s real innovation. Dunedin gaming company Rocketwerkz, for example, offers its employees unlimited holidays and no set work hours . It’s not aimed specifically at helping women but these innovative approaches will be useful in increasing women’s participation.

An area of considerable interest to me is the gender pay gap. Considerable work has been done in this country on reducing the pay gap, including increasing the education and skill level of New Zealand women – so that women are now, on average, more highly qualified than men. Yet the pay gap stubbornly remains.

In 2016 I chaired the Joint Working group on Pay Equity and through that process I came to understand more clearly the challenges faced by workers in female dominated workforces such as early childhood education, aged care workers and social workers. Recent international evidence also indicates that when women enter a previously male-dominated field in large numbers, the average pay can drop, even if the work being done remains the same.

Just yesterday, the Minister for Women, released new research on the behaviour, attitude and assumptions that drive the gender pay gap. The week before, Statistics New Zealand and the Ministry for Women released a report on the ‘motherhood penalty’ - the pay gap for parents and those without children. We are being challenged to acknowledge and discuss these issues more widely and we all need to be part of that conversation. Changing attitudes takes time but we have seen that it can be done.

I spoke this morning in Wellington of the importance of female role models. We have seen many inspiring women leaders in New Zealand – some of whom have become household names.

For all that success, women remain under represented in the top echelons of the private sector, with only 17% of directors being female and only one of our Top 50 companies currently has a female CEO. That’s quite a contrast with the state sector where women hold 45.2% of leadership roles. Even Australia has a higher representation of women in private sector board governance roles, at 25%. That’s a significant reversal from the position 20 years ago.

During my career as a company director I was often the only woman in the board room and I found that it was hard to speak out and be bold for change on one’s own. The state sector’s success in encouraging women leaders tells us that women have both the ability and the desire to take on these roles. It would be great to see that emulated in the private sector. In the 1990s we were told that change was happening, it was just a matter of time. Twenty years on we can question just how long it will take. I wonder whether it is now time to establish quotas to make that final breakthrough.

Many of you in this room are in positions where you can use your considerable talents and expertise to support and enable other women. Indeed, it’s one of the principal reasons why Global Women exists. Perhaps when you consider the #BeBoldforChange message, you might give some thought to what you personally can do in this area. As I said this morning in Wellington – there are seats at the table for us. We each have an important part to play in encouraging other women to take up those seats too.

For me, the #BeBoldforChange message is a reminder not to be complacent about the gains we have made. At a personal level, it’s about taking risks and seizing the opportunities that are put in front of you. As leaders, it’s about taking responsibility for making our workplaces more reflective of the New Zealand we see around us.

Individually, we can make a difference but together we can change society. That’s a really powerful thing and a great message for the rest of the world about the value of gender equality in the workplace. After all, as American politician Bella Abzug said “The test for whether or not you can hold a job should not be the arrangement of your chromosomes.”