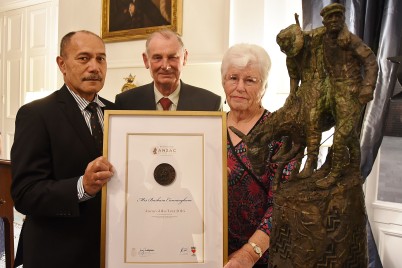 It is an honour to host, in partnership with the RSA, this Anzac of the Year Award ceremony.  Every year we seek out a person or group who live their lives in a way that embodies the Anzac spirit.

The embodiment of the Anzac spirit was clearly represented during the ill-fated Gallipoli campaign.  This year marks the centenary of the first commemorations of the events that took place at Gallipoli and the first Anzac Day.

Amongst the reports of the fighting and mayhem that arose from that campaign, were stories of great compassion and comradeship.  One of these concerned the courageous actions of Private Richard Henderson, a 19-year old teacher trainee, who carried wounded soldiers to safety on his donkey.  His actions have come to represent our ideal of the Anzac spirit.

The use of the imagery of Henderson and his donkey reminds us of what the Anzac of the Year award is about - ordinary people accomplishing extraordinary things.  This award celebrates those who have dedicated themselves to helping others and who have demonstrated the comradeship, compassion, courage and commitment that are considered to epitomise the Anzac spirit.

It is now my privilege to announce the recipient of the 2016 Governor-General’s Anzac of the Year Award – Mrs Barbara Cunningham of Mataura.

Barbara Cunningham is a former midwife and has lived in Mataura for 33 years.  She is an unsung hero of the Mataura community and works tirelessly to support community-good projects while accepting very little recognition or reward for her efforts.

The Mataura Community Garden is an initiative that grew from an idea of Barbara’s.  She was concerned that many people didn’t know how to grow plants, and she could see the potential for a community garden to help support struggling families in the area.  It took some time to get the project off the ground, but Barbara persevered.

The Community Garden has now grown into so much more than Barbara’s original vision, thanks to donations from the council and local businesses, and a very enthusiastic group of volunteers and is a great source of community pride.  Any community member can come and select vegetables on a Saturday morning for a gold coin donation; the local Meals on Wheels service is supported through the provision of vegetables to ensure that local residents have access to a freshly made meal each day; local family families can access fresh produce for any family in need at any time.Barbara’s passion and organisation have ensured the success of this project through the way she has drawn people in.

The Mataura Community Garden and Mataura School Garden Club were much deserved winners of the Community Impact Award at the 2015 Gore District Community Awards.

The group, spearheaded by Barbara, set about finding a way to provide a locally made, fresh meal to those in need, all within the set budgets thanks to produce donated by the Community Garden. In addition, it is publicly known that the Meals and Wheels service in Mataura is not limited to elderly residents, but that anyone in the community with a short or long term need could have meals provided to them and Barbara is the point of contact for anyone wanting to access this service.

In 2012 Barbara was elected to the Mataura Community Board and has held that position since.

Barbara lives her life in the spirit of the ANZAC. She is a community minded, compassionate, driven individual.

Ladies and gentlemen, it has been my privilege to present the Anzac of the Year Award to Barbara Cunningham.

The American author and historian Louis “Studs” Terkel once said “Heroes are not giant statues framed against a red sky. They are people who say: This is my community, and it is my responsibility to make it better.”

Barbara, your citation tells a story of someone who has taken on that responsibility and made a real difference in the world around her.

Your care and concern for others, your commitment to your community, your ability to bring people together and your courage in seeing projects through makes you the embodiment of the Anzac spirit.

Your citation tells only part of the story.  I think the proof of the impact you’ve had on the township of Mataura is best summed up in the words of the people who know you.

Alan Taylor, Chairman of the Mataura Community Board said “Barbara doesn’t wait to see if someone else will address local issues, she is first off the bench to make a difference.”

Jo Brand from Mataura Community Development described you as “the backbone that every community needs” and “a god-sent doer in a sea of talkers.”

John Ranstead, Family Worker at Mataura Presbyterian Church called you a quiet and determined character who knows how to get a job done.  He also mentioned that despite being a very deserving person for an award, you’d be the last person to want one - so we’re very pleased you’re here tonight!

Barbara you are a most fitting Anzac of the Year in this the centenary year of the very first Anzac Day, and Mataura is lucky to have you.  Congratulations and we wish you all the best for the future.