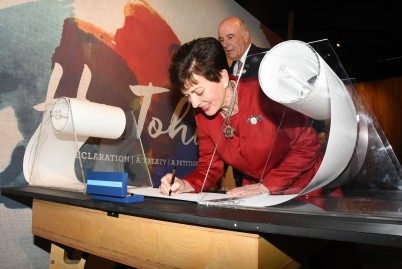 My acknowledgement of all the Māori authorities who have gathered to support He Tohu.

I welcome the words and history you bring today, and acknowledge your place in their origins.

It is now our collective duty to take the significance of the exhibition to Aotearoa, and to the wider world.

Allow me to express my deepest gratitude to you all.

It is an honour and a privilege to be here today – representing our Sovereign, Queen Elizabeth II and the people of New Zealand – as we acknowledge and affirm the significance of three documents that have played such an important role in our nation’s story.

These are taonga that deserve our greatest care and respect – not only because they represent significant steps on our collective journey as a nation – but also because their wairua continues to speak to us today.

The Declaration of Independence - He Whakaputanga o te Rangatiratanga o Nu Tirene, signed by the Confederation of United Tribes in October 1835, represented the first declaration of sovereignty for this country.

It was also an important first step towards pan-iwi relationships and a formal relationship between rangatira and the British Crown.

On 6 February 1840, a further step was taken towards nationhood with Te Tiriti o Waitangi, and the partnership it established between the two Treaty signatories – Māori and the British Crown.

Governor Hobson sent copies of Te Tiriti to regions throughout New Zealand for signature, and 200 printed copies were distributed.

As the most recent of Governor Hobson’s successors, I made sure that on my first Waitangi Day as Governor-General, copies of our founding document were distributed to visitors to Government House.

It is vital that all New Zealanders, wherever they came from, know understand what was promised in the Treaty. Hence my decision to host a book launch for Treaty x 30 – translations of the Treaty into 30 languages – because I value such efforts to reach the 25 percent of New Zealanders were not born in this country.

My hope is that in the years to come, visits to the birthplace of the Treaty, Te Kongahu: Museum of Waitangi – and here to the National Library to see He Tohu – will be regarded as rites of citizenship for all New Zealanders.

As just the third woman to have the role of Governor-General, I cannot help but take a particular interest in the Women’s Suffrage Petition.

New Zealand can celebrate its place in history as the first self-governing nation where all women had the right to vote in parliamentary elections.

The passage of the Electoral Act 1893 represented a monumental shift in human rights. We should heed Kate Sheppard’s call to exercise such a hard-won right.

She said “Do not think your single vote does not matter much. The rain that refreshes the ground is made up of single drops”.

As we approach the 125th anniversary of her victory, it’s fair to say that we can still all point to evidence of gender inequity, and that the ground still needs refreshing. He Tohu can remind us not to be complacent about the gains that have been made. There is still much work to be done.

We owe it to the women who strived for us, to ensure that the women of the future can fulfil the dreams and aspirations of their suffragette forebears.

To conclude, I will now read a personal message from Her Majesty Queen Elizabeth.

I am delighted to send my good wishes to all those celebrating the opening of the exhibition “He Tohu”, housing three of New Zealand’s most important constitutional documents – the Declaration of Independence, the Treaty of Waitangi, and the Women’s Suffrage Petition.

I am sure this new exhibition will give many people, from New Zealand and from around the world, the opportunity to learn more about these historical documents, and to reflect on their enduring importance to New Zealand and its people.

The Declaration, the Treaty and the Petition each remind us that when a set of values, based on equality, participation and respect, are put down in writing and signed by many, they can become a powerful and abiding symbol of hope and inspiration for the future.

It now gives me great pleasure to formally open He Tohu.