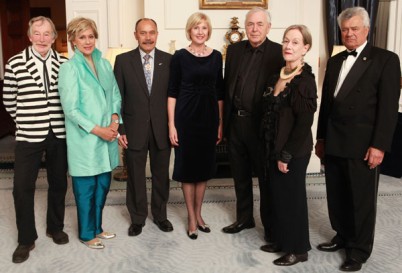 To find out more about the 2013 Icons Awards, click here

It is a great pleasure for Janine and me to welcome you all to Government House this evening for the Arts Foundation of New Zealand 2013 Icon Awards.

This is the first time we have hosted this esteemed awards ceremony.  However, as the fourth Governor-General to be Patron of the Arts Foundation, I have found that the story of the Foundation is intertwined with that of Government House and the Office of Governor-General from its beginning 14 years ago.

Our predecessors, Sir Michael and Lady Mary Hardie Boys, hosted many of the working party meetings that led to the establishment of the Foundation, which Michael launched here in 1999.

Dame Silvia Cartwright presented the inaugural Icon Awards in 2003 at the St James Theatre in Wellington.  Silvia now features in a poem  by Icon recipient Hone Tuwhare, lyrically detailing his fear of being pricked by a vice-regal pin!  Sir Anand and Lady Susan Satyanand hosted the 2008 Award for Patronage for Sir Roderick and Lady Gillian Deane, and also hosted the 2011 Icon Awards.

We’re delighted to continue that close association, and to play a part in supporting the Foundation’s work in endorsing and championing the work of New Zealand’s artistic community.  We very much enjoyed hosting a reception here in April last year to recognise some of the key individuals involved in establishing the Foundation.

What has made, and still makes, it easy to support the Foundation is that the Foundation recognises and promotes things that are important to New Zealanders – art, artistic expression and people - our artists.  During its lifetime, the Foundation has donated more than $4 million to artists, and honoured more than 100 artists.

The $6 million under management, and in excess of $15 million promised in legacies, means the Foundation can play an important role in enhancing and securing the cultural fabric of our country.  The generosity of donors, sponsors and supporters ensure that those who create art are given the opportunity and resources to do so, for local, national and international enjoyment.

Art has always been a great communicator.  It has an unparalleled capacity to reach out to hugely diverse audiences.  An exceptional thing about art is that its message is totally admirer specific.  And on that note, the words of New Zealand artist John Reynolds seem appropriate to recite:

“I love art, I love it for that thing that it does. It’s bigger than the individual that does it… it’s heady, it’s something you’re in the spell of.”

Tonight we are in the spell of and celebrate the presentation of the Foundation’s most prestigious accolade – the Icon Awards.  The nature of honouring New Zealand’s most significant artists, the Icon Awards, was inspired in part, I understand, by New Zealand’s highest non-titular honour, the Order of New Zealand.

Like the ONZ, the Icons are limited to being held by 20 living recipients.  With past recipients that include the late Margaret Mahy, one of New Zealand’s most recognised and loved authors, and internationally acclaimed movie maker, Sir Peter Jackson, this prestigious award carries the mana of those impressive and distinctive New Zealanders who have, and will, receive it.

As Governor-General, on behalf of all New Zealanders, I would like to emphasise the pride that we take, as a country, in the achievements of our own.  I congratulate all of tonight’s recipients in advance and, like everyone present, I look forward to acknowledging and congratulating them.

I now have great pleasure in introducing the Chair of the Arts Foundation of New Zealand, Fran Ricketts.