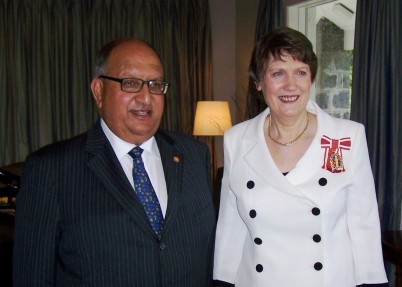 Distinguished Guests, ladies and gentlemen. I begin by greeting everyone in the languages of the realm of New Zealand, in English, Māori, Cook Island Māori, Niuean, Tokelauan and New Zealand Sign Language.  Greetings, Kia Ora, Kia Orana, Fakalofa Lahi Atu, Taloha Ni and as it is the morning (Sign)

My wife Susan and I welcome you to Government House in Auckland for this investiture ceremony.

As Governor-General I have the authority and privilege on behalf of Her Majesty The Queen of New Zealand to hold an Investiture for her and to confer the honour of a Member of the Order of New Zealand on Rt Hon Helen Elizabeth Clark, formerly of Auckland and more recently of New York, for services to New Zealand.

I will now ask Hewitt Humphrey, holder of the Queen's Service Medal, to summon Helen Clark and to read the citation.

Concluding remarks:
Ladies and Gentlemen, as you have heard and witnessed, I have just now had the pleasure of investing the Rt Hon Helen Clark with the Insignia of New Zealand's highest honour, the Order of New Zealand.

The Order, instituted by Royal Warrant in 1987, is awarded for "outstanding service to the Crown and people of New Zealand in a civil or military capacity".  The previous holder of the badge presented this morning was held by the late Sonja Davies, a foundation member of the Order who died in 2005.

Without doubt, Helen Clark's career in the national and international arena easily fits the criterion.

I would like to comment briefly on the role of Prime Minister which she held, and for more than two years of which I had a direct association.

The Prime Ministerial role was once described as "primus inter pares"- first among equals.  While that phrase might have adequately described the role a century ago, it is not a sufficient description today.

The Prime Minister has broad powers and influence across the whole of government, as well as heavy individual responsibilities.

The media and the public expect that a contemporary Prime Minister will have encyclopaedic knowledge of all domestic and external events, and be ready to expound on any issue raised in any context or forum.  The time required to absorb briefings and to master the relentless flow of issues requiring Prime Ministerial attention is punishing for any individual.

Prime Ministership is also an inherently lonely role, for there can be only one holder of office.  While many decisions are made by Cabinet as a collective, there are some which the Prime Minister makes alone.  While senior public servants, Cabinet colleagues, family and friends can be turned to for advice and support, it is the Prime Minister who then has to take responsibility for the decisions.

For almost nine years, Helen Clark shouldered both the powers and responsibilities of being Prime Minister confidently and adeptly.  That only four other New Zealanders (Seddon, Massey, Holyoake, and Fraser) have held the Office for longer speaks much of Helen Clark's acumen, abilities and judgement.

It is in the nature of events that politicians are both praised and criticised for specific decisions.  Even so, regardless of anyone's political disposition, I do not believe anyone would question that Helen Clark always strived to do her best for New Zealand and New Zealanders.

As Governor-General, I congratulate you on your honour and, on behalf of all New Zealanders, thank you for your service to our country.

And on that note, I will close in New Zealand's first language, Māori, offering everyone greetings, and wishing you good health and fortitude in your endeavours.    No reira, tēnā koutou, tēnā koutou, kia ora, kia kaha, tēnā koutou katoa.