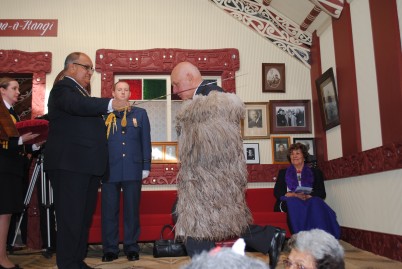 To view more images from the ceremony, click here

I then greet everyone in the languages of the realm of New Zealand, in English, Māori, Cook Island Māori, Niuean, Tokelauan and New Zealand Sign Language.  Greetings, Kia Ora, Kia Orana, Fakalofa Lahi Atu, Taloha Ni and as it is the afternoon (Sign)

As Governor-General I have the authority and privilege on behalf of Her Majesty The Queen of New Zealand to hold an investiture ceremony for her and to bestow the honour of knighthood and present the Insignia of a Knight Companion of the New Zealand Order of Merit to Emeritus Professor Sir Tamati Muturangi Reedy, of Wellington, for services to education.

Just before doing so, I would like to take an opportunity to talk about the significance of this investiture.

At the outset, I offer sincere condolences to you Sir Tamati and Lady Tiri on the recent death of your daughter Rachel.  For a family to celebrate at a time of mourning is very difficult and I trust that today’s ceremony will also serve as a tribute to her memory.

This event today is not, however, the first time that a Governor-General has convened an investiture at Ruatoria.  Most famously, it was at Uepohatu Marae,  Ruatoria, that the posthumous investiture ceremony for 2nd Lieutenant Moana-Nui-a-Kiwa Ngārimu was held in October 1943.  My predecessor as Governor-General, Sir Cyril Newall, travelled to Ruatoria to present the Victoria Cross to Lt Ngārimu’s parents, Hamuera and Maraea Ngārimu.

Lt Ngārimu, a member of C Company of the 28 (Māori) Battalion, was awarded New Zealand’s highest honour for gallantry for his outstanding courage and leadership in the attack at Tebaga Gap in Tunisia on 26 March 1943, in a battle that sadly claimed his life.

The significance of that investiture ceremony was emphasised in The Price of Citizenship, written by Māori leader and MP, Sir Apirana Ngata.  A copy of the book, with a handwritten note from Ngata to Newall, continues to hold pride of place in the Government House library in Wellington and I have brought it with me today.

Those words, “the price of citizenship” also formed the English subtitle of Dr Monty Soutar’s 2008 book, Nga Tama Toa, which outlined the commitment and sacrifices of C Company during the Second World War.  Nga Tama Toa is also the name of the Wharekai here at Hiruhārama Pā.

At that ceremony 67 years ago, one of the principal speakers was Sir Tamati’s grandmother and Lt Ngārimu’s aunt, Materoa Reedy .  At the time, her son and Sir Tamati’s uncle, Hānara (Arnold) Reedy, a Captain in the Māori Battalion, was a prisoner of war having been captured by Nazi forces during the Battle of Crete.    While he could have escaped on one of the last boats leaving the island, the 38-year-old selflessly chose to stay when he saw many of his much younger kin among those who would not be able to leave.

Lt Ngārimu, Materoa Reedy and Arnold Reedy were Ngāti Porou leaders who gave great service to their iwi, to the community and to New Zealand.  Ngāti Porou’s contribution to New Zealand also includes people of such mana as Sir Apirana Ngata, his son Sir Henare Ngata and Dame Iritana Tāwhiwhirangi, whom I invested as a Dame Companion at a ceremony last year.

The tribe also stands at the cusp of change.  Earlier this month, the Ngāti Porou Claims Settlement Bill, received its first reading in Parliament.   I understand you, Sir Tamati and Lady Tiri, were in the public gallery when this occurred.   The settlement of Ngāti Porou’s claims offers the opportunity to set the tribe on a new course based on development.  I am sure Sir Apirana’s spirit will return to the debating chamber when the legislation is passed.

For these many reasons, it seems fitting that this investiture ceremony takes place here on Hiruhārama Pā and that we today recognise another Ngāti Porou leader, Emeritus Professor Sir Tamati Reedy.   I will now read the citation, which outlines Sir Tamati’s significant service to education:

Professor Reedy is of Ngāti Porou descent. He is a noted linguist and educator and holds an MA from the University of Auckland and an MA and PhD from the University of Hawaii.  He had an extensive career in secondary schooling, becoming a Fulbright scholar in 1983.  He served as Secretary of the Department of Māori Affairs from 1983 to 1989 and was extensively involved in the kōhanga reo movement.  In 1996 he was involved in developing the draft document, Te Whāriki, which was the basis for a bicultural curriculum that is now a statutory requirement for all licensed and chartered early childhood education centres. He was the foundation Dean and Professor of the School of Māori and Pacific Development at the University of Waikato in 1996. He was appointed as the University’s first Pro Vice-Chancellor Māori in 2001 and in 2005 he was appointed as Professor of Māori Sustainable Enterprise in the University’s Management School.  In 2010 he became the University of Waikato’s first Māori Emeritus Professor, and in the same year, he was also appointed to the Waitangi Tribunal.  He has also had a long involvement with the Aotearoa Māori Tennis Association, and in 2007 he donated funds to establish the Nga Purapura Trust to provide financial assistance to outstanding Māori tennis players. Professor Reedy is also a former New Zealand Māori Rugby representative.

I might also add that since Sir Tāmati was nominated for this honour, he has chaired an independent panel, Te Paepae Motuhake, established by the Government to review the Māori language sector and strategy. The panel’s report, Te Reo Mauriora, was launched last month .  While not linked to education, I understand Sir Tamati also served as a Territorial Force officer.

And so, before I formally confer this honour, I will close in New Zealand’s first language, issuing greetings and wishing everyone good health and fortitude in your endeavors.  No reira, tēnā koutou, tēnā koutou, kia ora, kia kaha, tēnā koutou katoa.

I now summon Sir Tamati Muturangi Reedy to come forward to receive the honour of knighthood and the Insignia of a Knight Companion of the New Zealand Order of Merit.

Reception for the Diplomatic Corps