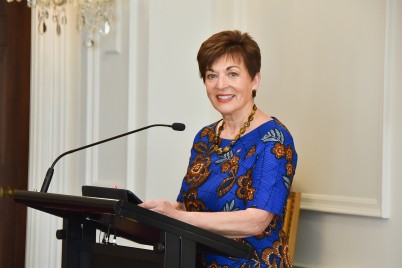 A beautiful day dawns. We remember those of our loved ones whom are but memories to treasure those whom have passed on. Farewell one and all.

I acknowledge the iwi of Te Whanganui a Tara and you, the esteemed visitors whom have arrived to this commemoration luncheon. Greetings to one and all

The Dean of the Dip Corps, Leasi Papali’i Tommy Scanlan

His Excellency Koichi Ito, the Ambassador of Japan

And a very warm welcome to the men and women of Jayforce who have been able to join us here at Government House this afternoon, along with their families.

This is your day and it’s a privilege to host you here.

Please see this gathering as a further demonstration of the esteem, however belated, that you deserve for the service you rendered to your country over seven decades ago.

For some of you, a military career was never part of your life plans.

You had answered the call to arms in the Second World War and left your civilian life behind.

Some of you were conscripted into service, and some of you volunteered to join Jayforce.

Today your thoughts will have turned to the challenges, the friendships, and the experiences of that time – experiences that changed the course of your lives and contributed to the person you became.

Whether you were itching to return home from Italy at the end of the War, and instead finding yourself diverted to Japan – or were an enthusiastic volunteer from home, wanting to do your bit –  when you arrived in Japan, you were transported to a very different world.

You knew you were going to the homeland of a feared enemy.

You knew about the nuclear bombing of Hiroshima and Nagasaki, but nothing could have prepared you for the desolation you witnessed at Hiroshima – or the horrendous injuries suffered by civilians there.

You saw cities and ports flattened by bombing. You saw homelessness and people living on the very brink of survival.

Those experiences must have been life-changing.

At the time when New Zealanders knew so little about Japanese culture, you were given unique opportunities to interact with civilians and returning prisoners-of-war.

By and large, you were met with civility and respect, and over time, your views of Japanese people were tempered by these experiences.

You brought those new attitudes and understandings home with you to New Zealand. You played your part in the shift in relations between our two nations and helped us to turn a new page in our shared histories.

In 2019, when I went to Japan to represent New Zealand at the enthronement of the Japanese Emperor, my impression of Japan was that it was a vibrant, peaceful, and prosperous country – so vastly different to the desolation you encountered in the 1940s.

The veterans of Jayforce were there at the very beginning of that recovery and transformation, and helped to make it possible.

On behalf of the people of New Zealand, thank you most sincerely for your service to your country through such a critical time, and I wish you and your families all the very best.