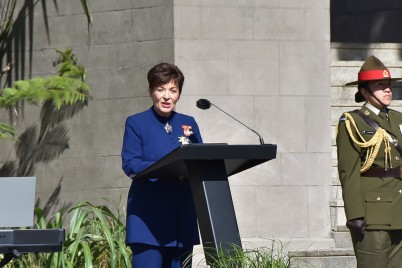 I acknowledge the iwi of this area, Toa Rangatira, Te Ati Awa and all who have gathered on this important day of Commemoration. Greetings one and all.

I am privileged to accept your invitation to speak at this service of remembrance, to those brave New Zealand soldiers who served gallantly in the name of freedom. Thank you for your service.

The Dean of the Dip Corps, Leasi Papali’i Tommy Scanlan and members of the Diplomatic Corps, in particular on this occasion, His Excellency Mr Koichi Ito, Ambassador of Japan to New Zealand

And our guests of honour, Jayforce Veterans and Families

Seventy-five years ago, the first New Zealanders arrived in Japan to serve in the British Commonwealth Occupation Force. The occupation was New Zealand’s first large-scale military involvement in an Asian country. That deployment had a far-reaching impact on those involved, their families, and our wider community.

It is a privilege to join you all today as we honour the New Zealanders who served in Jayforce, including those who lost their lives during their service, and those who have passed away in the years since.

A special welcome to the veterans who have come from all corners of New Zealand to be here today, representing your Jayforce comrades. It’s an honour to share this experience with you, to acknowledge your unique memories of that time and your links to an important period of our history.

A warm welcome also to the families and whānau here today, and to all the veterans who are unable to be here, and are watching this service from other parts of the country.

More than 12,000 New Zealanders served in Jayforce. The first to arrive in Japan came from service in Italy – many had seen action in the final stages of the Italian campaign, and with the war now over, had to steel themselves for a new deployment, instead of travelling home to loved ones.

Subsequent arrivals were volunteers from New Zealand – many of whom had missed out on service so far – or had found it difficult to settle back home after the War.

Among the more than 4000 New Zealand troops who arrived in Japan in 1946 was the 270-strong D Squadron of the Divisional Cavalry Regiment. This was made up entirely of volunteers from the 28th (Māori) Battalion who had served in Italy. This unit too would be replenished by new recruits from New Zealand.

Also serving were the Women’s Auxiliary Army Corps; the New Zealand Army Nursing Service; and members of No.14 Squadron RNZAF who had served in the Pacific. The New Zealanders were based in the rural Yamaguchi and Shimane prefectures on the southern tip of Honshu.

After the Second World War, Japan was a nation in crisis. Some 2.7 million civilians and servicemen had died in the conflict; millions more were injured; and malnourishment and homelessness were rife after the Allied bombing of many major cities.

Soon after their arrival, most of the New Zealanders passed through Hiroshima on their way to Yamaguchi, and were shocked to witness the devastation caused by the nuclear bomb.

Among the first relief draft from New Zealand was the young poet, Hone Tuwhare.

Some of you may recall his famous poem, ‘No Ordinary Sun’, which was written in response to what he saw at Hiroshima. The thoughts he expressed would resonate with people involved in the anti-nuclear movement in subsequent decades.

The New Zealanders’ main tasks were demilitarisation and demobilisation, but they were also involved with repatriation, policing duties, and providing medical care. In 1946, New Zealanders helped to oversee a historic election, where Japanese women voted for the first time.

Prior to the Second World War, New Zealanders had very little knowledge of Japan and her people. To them, the Japanese were a wartime enemy, associated with notorious prisoner-of-war camps and the threat of invasion.

Understandably, occupiers and occupied faced each other with apprehension and – at times, hostility.

And yet in the two and a half years of the occupation, it became clear that there is a great difference between the military actions of nations, and the day-to-day lives of their citizens.

As non-fraternisation rules relaxed, New Zealanders and Japanese mingled more freely. New Zealanders missed the comforts of home and welcomed opportunities to be hosted in Japanese homes. Friendships were formed, and romances blossomed.

When Jayforce personnel were able to travel to Tokyo, they were stunned by their first experience of a big city.

Many members of Jayforce returned to New Zealand with a new appreciation of Japan, its landscapes, its culture and its people.

Some brought wives on their return. Known at the time as ‘Japanese war brides’, they were often disowned by their families – and faced suspicion and prejudice in their new country too.

Determined to rebuild their lives, they made an enormous contribution to New Zealand communities – founding Japan societies, teaching, translating, and raising families. By introducing their culture here, these brave women paved the way towards a gradual change of attitudes towards diversity and ‘otherness’ – a journey we continue to this day.

Over 40 of our cities and towns have active sister city relationships, and there are many friendship societies.

Japan is our fifth largest source of international tourists, and prior to Covid-19, around 50,000 New Zealanders were visiting Japan each year. We look forward to being able to resume these interactions in a post-pandemic world.

Looking back to the many ties made during the occupation, we can reflect on the role the members of Jayforce played in sowing the seeds for our nations’ friendship.

Jayforce was withdrawn in 1948, and it’s regrettable that its members did not return home to a heroes’ welcome, but rather to a country that had moved on from war and did not appreciate the significance of their service.

Those who had volunteered from New Zealand were not eligible to join the RSA or to receive war pensions until the mid 60s, depriving them not only of financial support, but also of companionship with others who had served.

It was not until 1995 that they finally received their New Zealand Service Medals, nearly 50 years after their service began.

Today we are marking the first national commemoration of Jayforce at Pukeahu National War Memorial Park, our place of remembrance for all who have served in war and conflict.

I welcome this opportunity to formally recognise those who served in Japan during the aftermath of the war.

They answered the call to serve their country, and during the occupation they did what was asked of them. In so doing, they made a significant contribution to Japan at a critical time in its history.

Today, as a nation, we remember the hardworking and courageous members of Jayforce, and acknowledge the role they played during an important chapter in the history of both Aotearoa New Zealand and Japan.