Ko Tatou, Tatou - We Are One National Remembrance Service Christchurch 2021 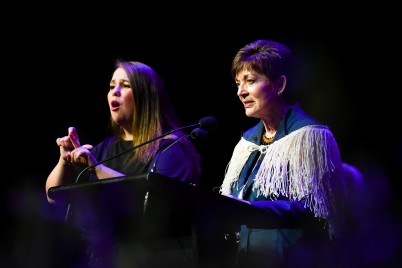 He tangi, he mihi, he poroporoaki

While the starry hosts above remain unchanged and unchanging

with the loss of precious loved ones.

To you who have travelled beyond the veil

You, who have been lost to the void of memories.

We grieve for you all, we cry in distress

What can we do other than to grieve, acknowledge and farewell.

Distinguished guests, gathered here today, warm greetings to you all.

Two years ago, an act of terror was unleashed on a group of peaceful people at prayer.

New Zealanders were deeply shocked by the cruel slaughter of 51 men, women and children – and the horrific injuries inflicted on a further 40.

We searched for words to express our outrage and sorrow.

We struggled to comprehend that this could happen here.

In the days that followed, we wept for the victims as we learned their names, studied images of their smiling faces and read stories about their lives.

We listened to tributes from those who knew them:

About the ‘good, kind man’ and about the woman who was living her dream by studying and working in New Zealand.

About the insurance agent who had recently become a grandfather; about the high school student, the restaurant owner, the welder, and the tech company co-founder.

Their loss has cut deeply – especially for the Muslim community of Christchurch.

Today we acknowledge the grief of the families, friends and colleagues of those killed and injured.

We acknowledge the trauma for those who survived the attack physically unscathed and who bore witness to the events of that terrible day.

We acknowledge the courage and compassion of the first responders, medical professionals and members of the public who helped the wounded – and helped to save lives.

And we acknowledge also the brave police officers whose actions prevented further carnage.

On that darkest of days for New Zealand, when we saw the very worst of humanity, we witnessed also the very best.

New Zealanders of all faiths and ethnicities instinctively gathered in public expressions of sorrow and sympathy.

There was recognition that we had work to do to ensure that mindless prejudice and hate cannot take root in Aotearoa New Zealand – and that merely hoping for that better future would not be enough.

Together, we shine a light into the darkness.

Together, our children learn that the qualities of kindness and decency are shared across humanity, and are not the monopoly of any ethnicity or religious persuasion.

By extending manaakitanga and aroha to each other, by standing firm in our resolve that Aotearoa not be a home for twisted narratives of hate, we will create the best legacy we can for those we have lost.

Ka maumahara tonu tātou ki a rātou. We will remember them.