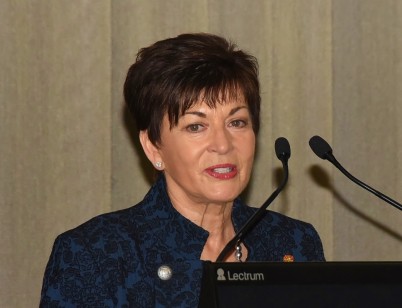 Thank you for inviting me to speak at this symposium to celebrate 30 years of the Law Commission.

While I am invited in my new role as Governor General, I note that my connection with the Law has had several strands beyond this present one. I have been, at various times, a lawyer, a law teacher, a litigant (as a corporate lawyer and company director) and an adviser on projects that have focussed on, or resulted in, legislative reform. From all those perspectives, it’s a privilege to be here.

At the Law Commission’s 2006 Symposium, the Chief Justice relayed a comment made after the swearing-in of Sir Anand Satyanand as Governor-General.

The office of the Governor-General is no stranger to the work of the Law Commission, given that the Commission is largely responsible for the most significant changes to the office in recent times.

It also recommended updating the statutory language associated with the office to remove any remaining colonial overtones.

But despite the familiarity of my office with the work of the Law Commission, discussions regarding ‘law reform’ are still an intimidating subject for a Governor-General to embark on - and the concept of a reforming Governor-General is one that makes officials distinctly nervous!

However, after just one month in office, I can report that I already see that this role will give me a unique perspective on the law, and law reform.

Today, I want to touch on the subject of New Zealand’s constitutional arrangements, in which the Governor-General plays a significant part, and which are the subject of topical and fascinating conversations.

A consistent theme is a concern that our communities do not have a good understanding of how the authority of the state is exercised, and where power resides.

As recently as 2013, the Constitutional Advisory Panel reported that there was a serious lack of understanding in the general public about how the New Zealand constitution currently works.

One clear message was the need for better education and for more accessible information about our constitutional arrangements and how decisions are made.

This lack of understanding is evident in the correspondence my office receives, as it regularly includes demands that the Governor-General dismiss the Government or particular Ministers – without delay!

It seems to me that before we can talk about the constitution, it is necessary to understand what is ‘constitutional’, regardless of the format in which it is presented. This presents a significant challenge, and one to which we must respond, if New Zealanders are to have a better understanding of the issues to be able to engage in informed debate. I have a responsibility, as do you in your respective roles as judges, practitioners and academics, to promote the importance of our constitution. And I use the term ‘promote’ generally – to encompass support, encouragement, and progression of the debate surrounding our constitutional structures.

The domestic role of the Governor-General, as you know, is made up of “three ‘c’s” – community, ceremonial and constitutional.

In my view there is also a constitutional aspect to the ‘community’ role.

I say this because those who hold this office, and those who support it over time, must think actively about how the public understands the job.

Already, on a number of occasions when visiting communities or hosting events at Government House, I have been asked the question, “So, what does the Governor-General actually do?”

While I use such opportunities to outline the scope of the role, at the same time I wonder what can be done to ensure our citizens have a better understanding of our constitutional arrangements.

It’s no surprise that technology is becoming a critical aspect of that engagement. In an age of online campaigns and crowd sourcing, online communities of electors expect to be able to exercise their democratic right to comment on matters being considered by the branches of government.

I know these are issues that the Law Commission has already considered and experimented with, and Sir Geoffrey Palmer and Dr Andrew Butler are to be commended for seeking to engage the public on their draft constitution through their website.

Constitutional reform through crowd-sourcing – there’s a thought worth pondering!

The Office of the Governor-General has endeavoured to adapt to the new environment as well. My time in the role has already shown me the value of social media as a means of connecting with the community. Our Facebook page is now more active than our website, and through it people can see immediately the activities that the Governor-General undertakes on a daily basis.

There is much more that can be done in this space - I look forward with interest to the launch of a Law Commission Instagram account in the near future!

Successful engagement is not only about the channels through which we engage. It is also requires an openness of mind - what Sir Eddie Durie has described, in relation to researchers and Māori communities, as the need to look inside their thoughts, concepts, philosophy and underlying values, and to avoid interpretations from an outward appearance. The Law Commission, in making its recommendations, is required to take into account te ao Māori and give consideration to the multicultural character of New Zealand society.

For my part, I am conscious also of my role as the Governor-General in and over the wider Realm of New Zealand. The communities belonging to Tokelau, the self-governing states of the Cook Islands and Niue come to the constitution with their own established historical, cultural and political reflections on what it means to be citizens of the Realm of New Zealand, and of how they might be best served by future reform.

A Māori concept that resonates with me is ‘Ka mura, ka muri: we look to the past to inform the way we move into the future, and learn from those who have gone before us.

One of the strengths of the Law Commission’s work is this ability to walk backwards into the future – to be courageous in re-examining legal frameworks and exploring law-reform options, while respecting the deep-rooted principles, shared understandings and culture that have shaped the course thus far.

Similarly, the office of the Governor-General is one that draws on tradition, as it evolves to look outward and forward. The office comes with a good dose of cultural and legal history attached to it, as well as a significant amount of ceremony and symbolism. It can be easy, over time, to forget why such things are important, and to question their relevance.

A dynamic, living constitution allows for an ebb and flow of substance and practice, and lends itself to a constant examination of the principles that sit behind it.

Over time some matters considered to be constitutional practice may fall away or be so modified that they no longer continue to exist.

At the same time, practices that, on first examination, may appear somewhat arcane, nevertheless survive, because the historical impetus for their development or creation still resonates today.

One such example is my regular Monday meeting with Cabinet Ministers in their capacity as members of the Executive Council. There I am advised to make regulations, other Orders in Council, appointments and to consider other matters necessary for the government to implement its decisions.

To the outside observer, this may appear to be an outdated, or indeed redundant, ceremony. After all, the business of the Executive Council can proceed in the Governor-General’s absence, and the documents may be signed at a later date. However, a certain amount of constitutional meat hangs off the bones of this ceremonial convention.

The meeting provides invaluable face-to-face time between a Governor-General and her responsible advisers which helps to ensure that they can work effectively together.

It also allows the Governor-General to stay up to date with significant issues that have arisen in the preceding week. These exchanges are not long. In Sir Denis Blundell’s time, the “one cigarette rule” applied. This rule referred to the brief time allowed for Sir Denis to quiz Ministers, after the formal business of the Executive Council was concluded.

However brief these exchanges – and I assure you that the one cigarette rule is one that has fallen away –  Executive Council meetings are a significant part of the process to keep the constitutional engine fuelled and running smoothly. To conclude, I point out that when we speak about law reform as it relates to the constitution, we often talk about having ‘conversations’ - a word that has perhaps lost some of its original impact in this context.

In my view, the key element to any conversation is the exchange of informed ideas between the parties affected. In order for us to engage in that exchange we must first learn by listening. I express my thanks to the Law Commission for providing us with an opportunity to listen in order to learn, so that we can continue this important exchange of ideas. I am sure that today will be made up of robust conversations, and I hope that your whanau, communities and networks are a part of the subsequent discussion.

New Zealand Riding for the Disabled