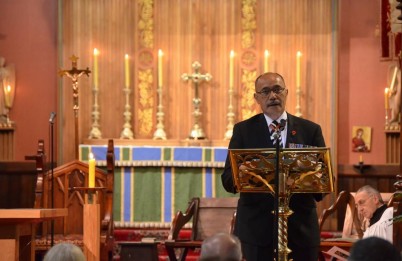 It is a privilege for Janine and me to join you today for this service in remembrance of ten brave New Zealand women who lost their lives after the troopship Marquette  was torpedoed by a German U-boat one hundred years ago.

Earlier today, at Akaroa, I unveiled the restored War Memorial there.  The honour roll includes one woman’s name – Margaret Rogers - a victim of the Marquette sinking.  However, two other nurses, Lorna Rattray and Nona Hildyard, also have affiliations with Akaroa.  I can report that all three were acknowledged by the Banks Peninsula community with white crosses at today’s ceremony.

So it’s only fitting that on the same day I was at Akaroa, I could come here to St Michael’s, where the first fundraising for a Nurses Memorial Chapel occurred, and to take this opportunity, in the 100th year of Army Nursing, to acknowledge the vital contribution of our Army Nurses.

The sinking of the Marquette is the greatest disaster in the history of New Zealand’s military Nursing, and caused outrage in New Zealand.  At the time it was noted that the loss of nurses, doctors and medical staff could have been avoided if they had been transported on a hospital ship instead of on a troopship in a military convoy.  The medical staff and our 10 nurses may very well have made the voyage across the Mediterranean Sea from Alexandria to Salonika safely if they had been in a hospital ship that had sailed without passengers the same day.

The accounts of what happened are just as sad today as they were one hundred years ago.  Apparently the Marquette went down quickly.  Nonetheless, nurses lined up calmly to get into lifeboats that then tipped over as they were lowered.  It was chaos.  Nurses were maimed or killed as lifeboats fell on them from above.  Nurses were sucked down with the ship.  Others encumbered by their heavy uniforms drowned in the unforgiving seas.

Nona Hildyard, injured by a falling lifeboat, was intent on keeping the spirits of others up and sang “It’s a Long Way to Tipperary” until she perished.  Mary Gorman gave away her lifebelt because her legs had been crushed and she assessed she would not survive.

Following the disaster, my predecessor, Lord Liverpool, informed the War Office that henceforth the New Zealand Government required that our nurses were to be transported in hospital ships.  That happened for the rest of the War.

Back here in Christchurch, the parishioners of St Michaels resolved to ensure that the sacrifice of the nurses would not be forgotten.  The Nurses Memorial Chapel is their legacy.

While I share your disappointment that we could not have today’s service at the Chapel, it’s also good to know that it is being strengthened and conserved for future generations.  In this way, it will serve as a permanent reminder of the sacrifice of our 10 brave women.

What we are also reminded of is that when war was declared in 1914, it was not only men who were keen to become involved, to join up and to do their bit.

Some determined women grabbed the first available berth and sailed to the other side of the world.  There they took on tasks that they would never have considered at home.  They helped in setting up hospitals.  They drove ambulances, worked in factories and canteens, worked as motor mechanics and cared for wounded soldiers.

Although New Zealand’s first expeditionary force to Samoa included nurses, it wasn’t until 1915, with the formation of the Army Nursing Service, that army nurses were sent to Europe.

Our nurses often worked in harrowing conditions.  They served in searing heat and biting cold, in the mud of Flanders and in the swirling sands of the Middle East.  Sometimes they were near the front-line, and often they had precious few opportunities to rest or sleep.

One un-named sister recounted the exhausting conditions on a hospital ship in the Persian Gulf.  Ship’s personnel, nurses included, and wounded men alike suffered from heat-stroke.  As she said the nurses and crew were: “not fit for much”.

They managed to keep going, because there was too much at stake.  In her words: “The 500 lives in our charge were more important than our own, and that was the spirit of the nurses on the ship”.

Such altruism was evident in a letter from Margaret Rogers in 1915, when she wrote: “There is no romance about war; it spells suffering, hunger, [and] filth.  How thankful I am every day that I came to do what I could to help and relieve our brave boys”.

The wounded that they cared for in Egypt included Bernard Freyberg, who went on to have an illustrious military career, before becoming Governor-General of New Zealand after the Second World War.

And it seems appropriate that our two women Governors-General, Dame Cath Tizard and Dame Sylvia Cartwright, have both visited the Memorial Chapel.

I know from my own time in the Army just how much the services of the Army Nurses are appreciated by all our servicemen and women.

In my case, I have had the opportunity to visit Brockenhurst where No. 1 New Zealand General Hospital and New Zealand nurses cared for an estimated 20,000 New Zealand troops in the First World War.  I was struck by the memorial there and the people of Brockenhurst who dutifully remember our men and women on ANZAC Day.

I was pleased to be able to attend a service earlier this year at our new National War Memorial – Pukeahu - where the centenary of Army Nursing was commemorated.  There, the women who died on the Marquette were acknowledged in the reading of the Honour Roll.

Throughout 100 years of service by our Army Nurses, I know that military nurses are proud to uphold the traditions of selfless service, resourcefulness and professionalism.  These are qualities established by those pioneers in 1915 and held today.
Kia ora, kia kaha, kia manawanui, huihui tātou katoa