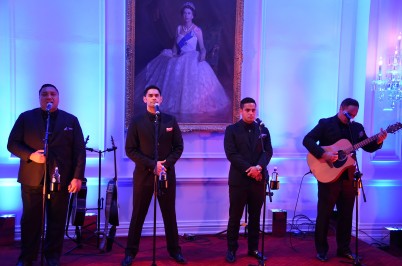 It is a great pleasure for Janine and me to welcome you all to Government House to celebrate Matariki – the Māori New Year, a New Year for New Zealand.

To Māori, the rise of the star cluster Pleiades was a sign that the short days of winter were nearly over.  Some iwi, looking at the seven stars, would tell the story of how the Mother Matariki, aided by her six daughters Tupu-ā-nuku, Tupu-ā-rangi, Waipunarangi, Waitī, Waitā, and Ururangi, was once again going to assist the Sun, whose journey from the North had left him weakened.

The yearly reappearance of the stars was met with celebrations.  People gathered with friends and families, to pay tribute to those who had passed on and to look forward together to the future.  Matariki speaks to us of the eternal story of death and rebirth and age-old joy of completion and moving forward.

The theme of my programme this year has been science and innovation: looking to the future.  As part of our programme, I have visited all of our universities, because they like Matariki are about looking to the future.  The importance of scientific research and the great things our young scientists are doing pave the way to fresh ways of thinking and doing that could provide benefit for millions of people worldwide.  We have a number of young scientists with us this evening and I’m sure they are all primed to play their part in the future of New Zealand.

One of the things I learned during my visits is that New Zealand has a special place in radio astronomy history .  In which case I will take this opportunity to mention a few astronomical facts about the star cluster Matariki.

The stars of Matariki are around 100 million years old and there are far more of them than the seven brightest that we can see with the naked eye.  The light from Matariki we see on Earth takes nearly 450 years to reach us.  We’re living in the latter years of the reign of Queen Elizabeth II, watching light emitted by the stars early in the reign of Queen Elizabeth I.

There are over 1,000 stars that make up the Matariki cluster, most of them young, hot blue stars.  The cluster is slowly moving and in around 250 million years, the stars will disperse and Matariki - the star cluster - will no longer exist.

My time as the Queen’s representative comes to an end in August so the theme of endings and new beginnings is especially poignant for Janine and me this Matariki, as is the sharing of bounty from the food storehouse.

This year we are marking Matariki with some members of our family and fellow New Zealanders we have got to know over the last five years – friends.  And in the context of a new beginning, we are looking forward to a continuation of the new beginnings for New Zealand – and specifically tonight for the All Blacks given the test match later this evening at the “cake-tin”.  Finally, as to a shared bounty, we have a jar of Government House preserves for each of you to take home.