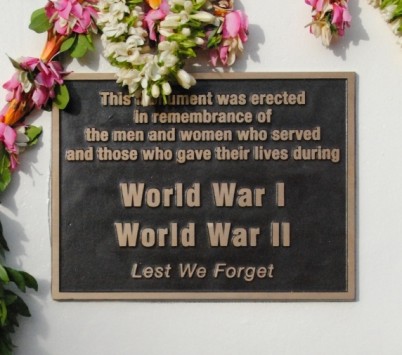 To view more images from the visit to Mauke, click here

To the Ariki, distinguished leaders and people of Mauke, greetings to you all.  Greetings on this day of remembrance that has brought me here as Governor-General of New Zealand for the first time to unveil this memorial to all those veterans of Mauke who have served in conflicts around the world.  Kia orana.

At the outset, I want to thank the people of Mauke for welcoming me and my wife Janine, and our delegation, here to your beautiful island.  You do us a great honour.

Today, we gather to unveil a memorial for the people of Mauke who answered the call of service to defend the Realm of New Zealand.  They served throughout the world to defend our Realm from tyranny, to defend the democratic values and civil liberties we share, and to bring peace to troubled lands.

Next year the world will mark the centenary of the start of the First World War.  That terrible conflict, dubbed the “Great War,” claimed the lives more than 18,000 New Zealanders and injured more than 40,000 others.

The call to arms was answered throughout the Realm.  Some 500 men from the Cook Islands volunteered for what they thought would be the adventure of a lifetime. The reality proved quite different.  They left their homes here in the tropical and tranquil South Pacific for the cold, the wet and the horrors of Europe, eventually serving in the Middle East.

Many initially served with the Māori Pioneer Battalion.  Later, they were formed into the Rarotongan Company,  and heavily involved in the British advance through Sinai and Palestine, which culminated in the capture of Jerusalem in December 1917.

They served loyally and honourably, and with distinction.  One of their number, Sergeant Pa George Karika, won the Distinguished Conduct Medal for “for conspicuous gallantry and devotion to duty while in command of a platoon.”   Karika was the only Pacific Islander in the New Zealand Expeditionary Force to receive this high honour.

Tragically, some paid the ultimate sacrifice and never returned home.  They are buried throughout the world from Auckland, Wellington and Sydney to England, Belgium, France, Israel, Gaza, and Egypt.

The people of the Cook Islands have continued to answer the call to service, in the Second World War and in other conflicts since.  The men of Mauke volunteered their service to the Empire and Allied causes in both World Wars.  With such a small population, sending so many men to fight on behalf of the Realm represented difficult decisions by individuals and families.  Our being here today acknowledges, thanks and honours that contribution.

I do not know the stories of the people of Mauke who left their homes to fight for our God, their King, and their country.  What I do know is that the people of Mauke can be proud of their contribution.  Like the great explorer Paikea, they set off into the unknown and gifted us the taonga of peace and freedom we enjoy today.

This memorial stands as a silent witness to their service, their sacrifice and their honour.  As we approach the centenary of the start of the First World War, the resurgence of interest in Anzac Day commemorations also reminds us of their service.  In 2015, we will remember the Gallipoli landings; a time special for Turks, Australians, New Zealanders and Cook Islanders.

ANZAC Day has become a day when we acknowledge the sacrifice, contribution and suffering of all those who have served and died for their countries in times of war.  It is a day that promotes a sense of unity across the Realm of New Zealand and across international borders.

The commemorations that will occur over the next five years are part of the unique bond between the Cook Islands and New Zealand.  They reflect the hard-won freedoms that underpin our business, cultural, sporting and constitutional ties.  They add to our shared Polynesian heritage, our shared history and our shared citizenship.