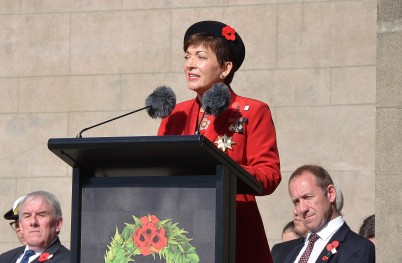 I welcome you all to the Anzac Day National Commemoration. I welcome New Zealanders across the nation, of all ages, who today pay homage to our servicemen and servicewomen.

On their behalf, I extend a special welcome to the veterans gathered here at the National War Memorial in Wellington and at commemorative services throughout New Zealand. And I welcome television viewers and radio listeners throughout the country and beyond. We appreciate your commitment to honouring this day.

Although it is over a century since the Australian and New Zealand Army Corps disembarked at Anzac Cove, Anzac Day retains a special place in the New Zealand consciousness.

Far from fading over time, memories of Gallipoli have become an enduring symbol of the horror of war – and the sacrifices of those who have fought and died for their country.

While Anzac Day has its roots in the First World War, it has come to encompass all the overseas conflicts that have affected our nation. This year we will mark the 75th anniversary of the Second Battle of El Alamein and the 50th anniversary of the first commitment of New Zealand infantry to Vietnam.

Next year will see the 75th anniversaries of the Allied victory in the North African campaign, the start of the Italian campaign, and the Royal Air Force Dambusters raid.

Anzac Day is a time to honour the New Zealanders who served in these and all subsequent conflicts. In our communities we have veterans of the Second World War, of Malaya, Korea, Vietnam and more recent conflicts.

To all the veterans here today, and around New Zealand – we thank you for your service. Anzac Day is your day.

Today we also acknowledge the men and women who are currently serving in the New Zealand Defence Force. New Zealand has played a proud role in helping to uphold the rule of law and respect for human rights and freedoms, wherever in the world these values are under threat.

Whether providing Military Observer services in the Republic of South Sudan or training Iraqi troops for their war against ISIL, today’s missions continue to be challenging. We respect the commitment and courage of our military personnel in what can be testing and extreme situations.

Closer to home, we have recently had cause to be thankful to the New Zealand Defence Force for its efforts to assist following the earthquakes in Kaikoura, during the fires in Christchurch, and most recently following the floods in Edgecumbe. In such times of national emergency, our military’s invaluable skills and capabilities can be life-savers.

Most New Zealanders have been fortunate not to have had direct experience of war, but we must remember that for many civilian populations in the world, there are ongoing threats to their survival.

There are New Zealanders amongst us who arrived in this country as refugees from the Holocaust, and since the Second World War they have been joined by thousands of people from other regions of the world which have been beset by conflict.

It is timely on Anzac Day to reflect on the experience of all victims of war, here at this beautiful commemorative space.

Pukeahu National War Memorial Park reflects the spirit of Anzac Day. It belongs to all New Zealanders, regardless of their background or beliefs. It is a shared space for remembrance of all war and conflict, and for reflection on how these tragic events have shaped our nation and the lives of our citizens.

The Queen Elizabeth II Pukeahu Education Centre on this complex will give our students the opportunity to learn about New Zealand’s experiences of conflict and peacekeeping, while developing their understanding of wider concepts of history, identity, civics and citizenship.

By giving our children knowledge of the past, we make a wise investment in the future. We want our young people to be better equipped to make informed, democratic choices about what it means to be a New Zealander and what kind of nation we want Aotearoa New Zealand to be. Our goal must be to create a future that is worthy of our forebears’ sacrifice.

The Great War Exhibition and the Gallipoli Exhibition have been two memorable highlights of the First World War centennial commemorations. Anyone who visits those exhibitions here in Wellington cannot fail to be moved by the courage, commitment, comradeship and sacrifice of our Anzac forebears.

In their name we will continue to come together every year on Anzac Day – from our diverse backgrounds and perspectives – and take time to reflect on the men and women who have served our country, and the values and freedoms they have sought to protect.

I can think of no more fitting way to honour their memory.