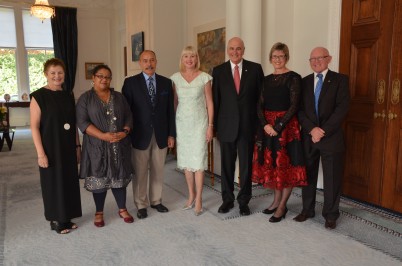 What a beautiful day Wellington has laid on today.  And to cap it off, there has been a wonderful announcement today with Dame Patsy Reddy named to be the 21st Governor-General of New Zealand.  I’m sure you will join with me in acknowledging and congratulating Dame Patsy.  She has contributed significantly to the arts and culture.  As the saying goes, behind every great woman or man there’s a supportive partner – and I acknowledge the presence of New Zealand Foundation Trustee, Sir David Gascoigne, who will address us later.

Ladies and gentlemen, it is a pleasure for Janine and me to welcome you all to Government House this evening to celebrate the conclusion of another successful New Zealand Festival.

This evening is doubly special because this year is the 30th anniversary of the Festival.  The first Festival in 1986 made a huge impact, locally and nationally.  Apparently it opened to a standing ovation.

Former Prime Minister Jack Marshall, who headed the group that created the Festival said at the time that Wellington and its residents would “benefit greatly culturally, socially and financially from the festival now and in the future.”   Thirty years on, I’m sure he would be delighted at how true those words have proved to be.

Tonight we are celebrating a festival that is New Zealand’s largest celebration of arts and culture.  The figures speak for themselves.  This year, over a quarter of a million people attended Festival events, across all art forms - the very best in dance, theatre, music, literature and the visual arts.

Whether they were moved, challenged, inspired or educated, the Festival offered its audiences more than entertainment.  The New Zealand Festival helped connect New Zealand with arts supporters and practitioners at home and from overseas - cultures met, experiences were shared, and lasting associations were formed.

For me, a personal highlight was the Royal Edinburgh Military Tattoo.  Having ventured outside Edinburgh only six times in its 60-year history, twice to Wellington, the Tattoo brought an unrivalled air of pageantry to the city.

My first Tattoo experience was in Wellington in 2000.  In 2014 I attended the Tattoo in Edinburgh, and took the salute.  This year, I was privileged to be a salute-taker again, on the opening night, in front of a crowd of enthusiastic New Zealanders.  With a cast of over 1000 performers and a replica of Edinburgh Castle as a back drop, it was certainly a scale of music and ceremony not often seen – even in Wellington!

Something the Tattoo reinforced to me was the number of people attending Festival events, many who were from outside of Wellington.  Over the Festival’s 30-year history, over 5 million people have been welcomed to the capital for its events.  That has been a significant benefit to the greater Wellington region, to its economy, to the wellbeing of our community, and to the development of artists - both here and on the world stage.

The Festival underlines Wellington’s role as a cultural powerhouse in our country.

Of course, festivals don’t happen by magic.  Each of you here tonight has made a contribution and we want to recognise that, and to say that your effort is valued.

This evening, I want to especially acknowledge Kerry Prendergast.  Kerry will be stepping down from her role as the Executive Chair of the Festival later this year.

Kerry’s contribution has been wide-ranging (or I could say across the board!).  She has been a Board member for 24 of the Festival’s 30 years.  As Chair she has seen the Festival through three biennial New Zealand Festivals, four annual Wellington Jazz Festivals, two Lexus Song Quests and a number of special events including The Globe Theatre’s Globe-to-Globe Hamlet tour here in 2015.  Kerry’s commitment has been substantial, extensive and successful.

The New Zealand Festival has long been a Wellington institution.  It is part of what makes this a vibrant city.  The commitment of the people here, to the Festival and vice versa, shows the way for other regions and their arts institutions.  Having grown up in Whanganui, I am well aware how important arts institutions are to the health and vitality of a city.  An event like a Festival for all New Zealand in Wellington, or a bricks and mortar national institution like the Serjeant Art Gallery in Whanganui need committed backers.

Thank you to all of you who give of your time, know-how and means so that others may enjoy arts and culture.  Thank you for joining us to celebrate another successful Festival.  I wish you well for the future, for the next Festival and many more after that!