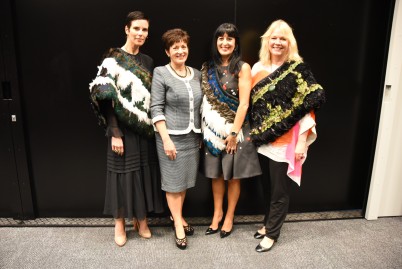 Thank you very much for inviting me to your Hall of Fame induction ceremony this evening - I am delighted to be here.

This is the first of four engagements for me this week where the focus is on empowering women.

As I am only the third female Governor-General in New Zealand, you will appreciate that I didn’t want to miss any of them.

They also align perfectly with my strategic goals for my time in office, which include:

It’s incredible now to think that we are not much more than a generation away from a time when women struggled to get bank loans and mortgages, and often had to relinquish their jobs when they got married, and when they were barred from some sports and professions. Indeed the term ‘sexism’ was first used – in the US – in 1968.

By the 1970s, when I was at university, the second wave of feminism - the Women’s Liberation movement - was in full swing, fuelled in NZ by the visit of Germaine Greer in 1972 – to celebrate International Women's Day – and the publication of her iconoclastic book The Female Eunuch. It was an exciting time to be a young woman. We were demanding the same rights and opportunities as those enjoyed by men, and the mantra was “Girls can do anything”. I felt confident that we were on the cusp of change from a patriarchal society.

Naturally I encountered some barriers during my early career – conscious bias and sexism were very much alive and well. I learnt to work with those challenges and to look for opportunities despite the prejudices I encountered. But in a typically Kiwi way, rather than make a fuss, I would get through some of these obstacles by adapting my style and biting my lip. I learned the rules of Rugby and cricket so that I could converse with my work colleagues. It worked for me, to a point, but looking back it wasn't enough to change the culture.

It was when, in the 1990s, I was appointed to corporate governance roles and I took my place around board tables that I really noticed the absence of other women. This tended to be explained away as ‘just a matter of time’. But here we are, over 25 years later, and this inequality remains, with only 17% of private sector board positions being held by women. Even Australia is ahead of us now, with around 25% female representation on boards.

I wondered why – and I still wonder – when so many women excel at school, at university – and the doors to most professions are no longer closed to them – that they are not coming through to the top.

The reasons for that absence are complex. We now recognise unconscious bias as a significant factor. But one thing is sure – this is more than a human rights issue. When it comes to business, gender balance makes sense. It results in better decision-making, organisational resilience and economic and productivity gains.

In New Zealand, we are fortunate to have a good legislative framework for gender equality, and the public sector is leading the way with gender representation on boards, with diverse representation on recruitment panels, and more flexible working conditions.

The Ministry for Women is playing its part in seeking to increase the number of women in governance. The Ministry already has over 1,000 highly qualified women on a nominations database for appointments to boards and committees and it actively promotes women for all public sector roles as they arise.

The Ministry is seeking to build on that database – particularly with candidates from the regions and from science, engineering and technology backgrounds.

We just need to see similar thinking become more widespread in the private sector. The trail blazing done by many of us, individually, over the past forty years has not been enough to change the culture in so many areas of our society.

It seems to me that Company of Women, and similar organisations, have taken this message on board, and are working to enable other women to achieve success.

It’s exciting to know that in New Zealand, the percentage of small to medium sized businesses run by women is increasing. Your work to encourage women entrepreneurs can only accelerate that trend.

There is nothing quite like doing what you love doing, feeling in greater control of your destiny, and choosing how you want to work. In New Zealand, more women are choosing that route – and are doing well.

The New Zealand Hall of Fame for Women Entrepreneurs is an opportunity to highlight this trend – and put a spotlight on remarkable talent and success.

We should not underestimate the power of role-models. They show what’s possible. They encourage us to take up that bright idea we’ve been mulling over, to develop it, and to make it work. That is a major difference from the society I grew up in, where female entrepreneurial role models were rare. You are all role models today.

I was impressed when I looked at the list of previous inductees and I look forward to shortly congratulating three more fantastic role models of entrepreneurship in action.