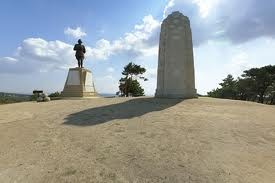 I extend greetings to you all again as we join to remember ANZAC day and all those, from both sides who lost their lives.
We will not forget them.
Again, greetings to one and all

It is a great honour to join you all today for the New Zealand Service at Chunuk Bair.

This is the second Anzac Day I have commemorated here, and I am again humbled by the emotions this place evokes.  In 2010, I climbed the New Zealand Track from Anzac Cove to Chunuk Bair.  In doing so, I retraced the footsteps of the New Zealand soldiers who took part in the battle for this ridge line in 1915.  My grandfather was amongst those who struggled up those slopes.

If Anzac commemorations are an important part of what it means to be a New Zealander, and I believe they are, then it is a privilege to come together at a place we associate so strongly with the qualities of the Anzac spirit: comradeship, compassion, courage and commitment.

Chunuk Bair is sacred ground for New Zealanders.  The ghosts of New Zealanders, their blood, their sweat and their tears are here.  It has become a byword for valour in our national memory.  For years to come, our historians will continue to debate the military decisions taken and consider what might have been.  Our artists, playwrights, musicians and writers will continue to explore what it means to us.

The capture of Chunuk Bair was intended to be part of a broader plan to occupy the high points on this part of the peninsula.  It was assessed that it would break the six-month long stalemate and take charge of the conflict.  It was an ambitious and complicated plan.  And it did not succeed.

However, the New Zealanders did manage to seize and hold this part of the ridge for two terrible days, but at an appalling cost.  The men of the Wellington Battalion seized the summit of Chunuk Bair before dawn on 8 August, 1915.  They hung on grimly throughout the day, in the searing August heat, repelling attack after attack.  Their inspirational commander, Lieutenant Colonel William Malone, led them in clash after clash against the charging Turks.

One soldier, Private Leonard Hart, described the scene as one he would never forget, with ‘dead and wounded lying everywhere’ and the wounded ‘so numerous that it had been impossible to cope with them all’.   Another soldier, Vic Nicholson, was to later reflect on the fortitude of those who could no longer fight but continued to play their part by reloading rifles for those who could.

By the end of the first day, Malone had been killed by an artillery shell.  Of the 760 men in his Wellington Battalion, only 70 were left standing.   Similarly, of 288 Auckland Mounted Riflemen who had started the battle only 27 answered the roll call at its end.

The following day, the New Zealanders still clung on to their positions, again at huge cost.  The Wellington Mounted Rifles lost 110 of their 183 men.  The Otago Battalion’s losses were equally severe.   In the wake of their horrific losses, we can only imagine the New Zealanders bitter disappointment when the troops that had relieved them were overwhelmed by a much larger force at dawn on 10 August.  Chunuk Bair was lost, and with it an opportunity to change the course of the Gallipoli campaign.

Most of the New Zealanders who died on Chunuk Bair have no known grave; they lie in this soil.  Their names, however, are inscribed on the Memorial to the Missing just below us.  Their names face the narrow waterway that was the objective of the campaign.

They and the men commemorated on the three other New Zealand Memorials to the Missing and in the various cemeteries on this peninsula came from all walks of life.  They are a true cross-section of New Zealand society, united in their commitment to fight for their country.

We New Zealanders are drawn here to honour their memory, to acknowledge their sacrifice; and to reflect, and share our pride and sorrow.

But Chunuk Bair is also a site of pilgrimage for the people of Turkey.  They come here to pay homage to their countrymen and the awful sacrifice they made during the campaign.  They fought valiantly and successfully to defend their homeland.  And Chunuk Bair is also a place to honour Mustafa Kemal, the man who organised their defences here and who later became the first President of the Republic of Turkey.

Unlike the great battlefields of the Western Front, the land which ANZACs and Ottoman forces fought over has not disappeared under housing or been obliterated by farm machinery.  Here, visitors from New Zealand, Australia and Turkey, and the other countries that fought in the Gallipoli campaign can see the traces of trenches, tracks and tunnels which give a vivid sense of the setting for the men who fought here.

For several years now, New Zealand, Australia and Turkey have been working together on an archaeological survey which has done much to record what remains of the Anzac battlefield.  In the coming years, this will help our children and grandchildren to get an understanding of Gallipoli.  They will be able to follow in the footsteps of the Anzacs, to walk The New Zealand Track to this place, or to venture down the track to look back at the landing beaches and up to the heights.  It will be a sure way to impress on them the difficulty of the challenge our Anzacs faced in August 1915 and the futility of war.

These words Mustafa Kemal Ataturk wrote in 1934, may also help to evoke in the descendants of the Anzacs the humanity of the Anzac experience.  They are read aloud by the Turkish Ambassador to New Zealand every year at an Anzac Day Service in Wellington and are a reminder of Ataturk’s benevolence and the generosity of our Turkish hosts.

Those heroes who shed their blood and lost their lives, you are now lying in the soil of a friendly country.  Therefore rest in peace.  You, the mothers who sent their sons from far away countries wipe away your tears.  Your sons are now lying in our bosoms and are in peace.  After having lost their lives on this land they become our sons as well.

I will close my address in Māori, by giving credit and recognition to those who came to this land, to those who have departed and are adorned as stars in the heavens, and to those who established this example.  Hoatu te mana, ki a rātou kua tae mai nei ki tēnei whenua, kua wheturangitia i te korowai o Ranginui, kua hangaia i tēnei tikanga.