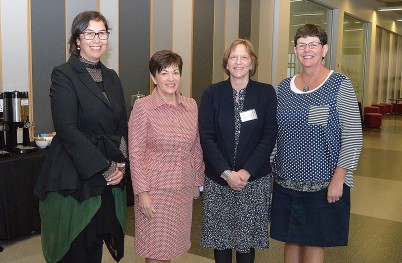 Aku mihi nui ki a koe, Rawinia, i to whakatau i ahau.

To this gathering of esteemed women, my greetings to you all. Thank you Rawinia for your welcome to me.

Let us gather together for these important matters which affects us all.

I'm delighted to be here today to give the opening address. This invitation could not be more timely.With 2018 having been the year of Suffrage 125, I have spent a lot of time speaking and thinking about women, leadership and gender equality.

It has been a chance for me to reflect on how far we've come and has often been a celebratory experience. 125 years on from becoming the first independent nation in the world where women could vote, we can feel proud of the equality of opportunity afforded to 21st century New Zealanders. Women are better educated, better paid, healthier and generally better off than at any time in our history. And we are better placed than our sisters in many other nations.

However, we have to acknowledge that these successes don't tell the full story. As I have said more than once in the last 12 months, there is still work to do. Our businesses, organisations and institutions still aren't truly representative of the demographics of our population.

Yes, girls can do anything. Careers that were once closed to us simply because we were women are now welcoming us, maybe not always with open arms, but with more enthusiasm than previously.However, in almost every profession and business, we are still not seeing that increased gender diversity properly reflected at the top levels. The barriers to entry may have been swept aside but the barriers to progress seemingly remain in place.

Events like this symposium give us valuable opportunities to examine the issues that may prevent or impede women successfully progressing into leadership roles.

Awareness that there are still issues is a good start.After the exhilarating years of the seventies and eighties, when the women's liberation movement challenged the established norms, I think we became complacent about the journey towards gender equality.

The feeling was that the battle had been won. After all, by the beginning of this century, we had women running our major institutions of state; the Governor General, Prime Minister, Chief Justice, Speaker of the House, and the CEO of our largest listed company, were all women. As for the wider gender equality statistics - we were lulled into believing that it was just a matter of time. We were making progress, women were coming up in the leadership pipeline, the glass ceiling would soon be shattered and all was well.

But of course, it wasn't.

Too often, the pipeline appeared to be blocked and, as Helen Clark recently noted, the glass ceiling was covered by a thick layer of men.

Recently though, there has been this tremendous upsurge in women's rights activism. Movements like Me Too, He For She, Time's Up and the Women's Marches have caused us to re-focus and re-evaluate. There is anger yes, but there is also determination and a commitment to fairness and most importantly equality. Women's rights are human rights. Everyone benefits when women are empowered.

I came of age during the Germaine Greer era, when the women's movement was vocal and militant. I never stormed any barricades or burnt my bra - I was a law-abiding law student - but I found the message, and the passion behind it, thrilling. There were others though, who didn't appreciate what they saw and regarded it as a threat to societal norms.

The women of that era were up against blatant sexism and entrenched ideas about the role of women. In a recent essay about the legacy of female suffrage, Sandra Coney talks about being part of a group seeking to establish a crèche at Auckland University and being told by the university council that they needed to choose between motherhood and education.Fifty years on, you can still feel the sting of that remark.

The advances of the last five decades have laid that type of in your face sexism to rest. Mostly. What we are dealing with now is more difficult as it's mostly hidden. Issues like unconscious bias, micro-aggressions and even our own social conditioning work against us in the workplace.

The last one is particularly important. We have to be careful that our own prejudices and misconceptions don't stop us from making progress or cause us to prevent others from doing so.

All too often we are made to feel that in terms of women's roles on boards and in management positions, the recruitment process takes its cues from the movie Highlander - "There Can Be Only One".This perception of scarcity has us believing that our competition is other women. Rather than working with each other to foster change, we end up working against each other.

Each of us needs to ask if we are working in a way that actively empowers other women, not just ourselves.

Ensuring that women have a clear path to leadership is, of course, what the next two days is about. Mentoring, coaching, networking; forming those relationships that will hopefully help more women find their way into senior roles.

As we have often seen, there is immense power in collaboration. From the days of the suffrage petition to the seismic changes of seventies women's lib to the bravery of those speaking up about workplace harassment, women working together have spearheaded positive change for our country and communities.

Finally, while I've concentrated on gender equity today, this should in fact be the easiest part of our diversity challenge.

Recently an extremely talented young woman of Chinese ethnicity told me that she felt that ceiling she was facing was made of concrete, not glass.

I hope your discussions and conversations over the next few days are fruitful.