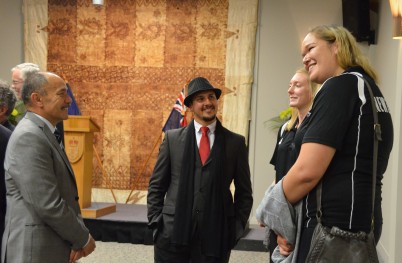 Ladies and gentlemen, warm greetings to you all, and welcome to Government House Auckland.

It is a great pleasure for me to welcome you all to Government House this evening, to acknowledge and celebrate the athletic excellence represented here today, on behalf of all New Zealanders.

Every four years, we have an opportunity to see the diversity and depth of our athletic talent in New Zealand in the greatest sporting competition – the Olympic Games.  People from every country and many different sporting codes are preparing to assemble to contest their chosen discipline at the Rio Games.

Over the years, Olympic moments have become part of our national memory.  Our athletes have been great examples of the Olympic spirit, and marvellous ambassadors for their country.

This year, it’s possible that 210 New Zealand athletes will contest the games, some will return to the Olympic arena, others will add their names to the 1604 athletes who have previously represented our country.

With just over three months still to go, there are some athletes still involved in the qualifying process for Rio.  My best wishes to those athletes, and my congratulations to those who have already been selected.

You understand, better than most that mere talent is not enough to succeed in the sporting and athletic realm, let alone life.  As the saying goes, there is no elevator to success: you have to take the stairs.

This reception is both an expression of our wishes of good luck and acknowledgement of your personal commitment to having taken the stairs to excellence.  In all things, luck is not an answer – you have to make your luck happen.

You know, better than most, of the sacrifices that have to be made by your families and supporters so you can compete at the highest level.

Let me say at the outset that we are very proud of your resolve, your efforts and your achievements.

The Olympic Committee’s slogan for Rio is “Be the inspiration”.  Just as you have been inspired by the 1604 athletes who have represented New Zealand before – from our first medallist in 1908 Harry Kerr; to Yvette Williams, our first woman to win a medal, and a gold one at that; to Malcolm Champion, Clarence Hadfield D’Arcy, Ted Morgan, Peter Snell, Ian Ferguson, Paul McDonald, Vicki Latta, Barbara Kendall and Caroline and Georgina Evers-Swindell to name a few more of our firsts – you too have the opportunity to inspire others - your fellow team mates and we ordinary New Zealanders.  You also have the opportunity to become role models to the next generation of athletes.

I also want to acknowledge the people here today who help our athletes achieve their goals, by inspiring and motivating them, by helping them perfect their technique, and by providing the infrastructure and support that they need to realise their potential.

And finally, as the American author and motivational speaker Zig Ziglar once said: “You were born to win, but to be a winner you must plan to win, prepare to win and expect to win”.  Thank you for all your hard work and effort, and all the very best to those of you competing in Rio, and to those of you who will be there in support of our team.