Opening of "The Man from Matakohe" Exhibition 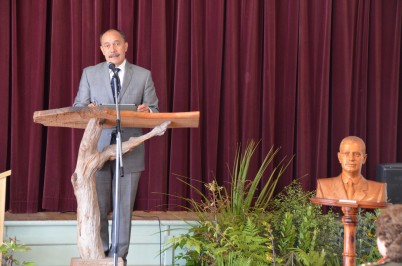 Thank you for inviting me here this morning to open this exhibition regarding the Rt Hon Joseph Gordon Coates - “The Man from Matakohe”.  I understand the last Governor-General to visit the Kauri Museum was Sir Arthur Porritt in 1970, so there has been quite a gap between vice-regal visitors.  It’s great to be the first 21st century Governor-General to visit.

The number 21 was also significant for Joseph Gordon Coates, the man whose career and life we are honouring today.  Coates was New Zealand’s 21st Prime Minister.  He could be said to embody many of the qualities we rate as being quintessentially Kiwi – a good man, hard-working, tough but fair.  That his name is no longer as widely known as some other former Prime Ministers is unfortunate.  His conduct and demeanour during his time in the public eye offer great examples of service to country and community and of commitment to doing what’s best for others.

Northlanders should feel very proud of the contribution Gordon Coates made to this country.  It is superb to see him remembered in this way by the people of the region he represented so well.  He was a County Councillor for over a decade and MP for Kaipara for 32 years.

Coates worked hard for his electorate.  He made sure that vital improvements to road and rail infrastructure took place.  His upbringing also gifted him greater insight and sensitivity to Māori issues than many other elected representatives of his day, and though not fluent in Te Reo, he was the first Prime Minister with a working knowledge of Te Reo .

It is fitting that this exhibition should coincide with the anniversary of the beginning of World War One.  Coates was part of that gallant generation who accepted the call to defend the Empire.  He served with distinction on the Western Front.  He won the Military Cross twice for exemplary gallantry during active operations against the enemy and was considered to be a fearless leader.

One of his soldiers, Sergeant W.H Linden spoke of Coates’ disdain for red tape and consideration for his men.  This desire to do the best by everyone was a theme throughout his life.  During his time in Parliament, he was noted for taking principled stands on issues, rather than being a slave to ideology and strictly toeing the party line.

This may have caused conflict between him and his party, but it also brought him friends from across the political spectrum.  Historian Michael Bassett, Coates’ biographer, asserts that Coates’ ability to cross party lines would have been an asset had he served in the modern MMP era.

Coates was part of that generation that experienced the worst of everything.  They fought through the horrors of The Great War to ensure no-one had to fight again.  What a bitter blow it must have been for them to see the world plunged into conflict again a mere two decades later.  In between they faced the rigours of the Great Depression with the glamour of the 1920s the only bright spot in an era of unrelenting difficulty.

All these events unmistakably shaped Coates’ career.  The war hero MP turned jazz age Prime Minister morphed into the political grafter of the Depression era.  Finally, he played a vital role as guiding light in the World War Two coalition cabinet.  It’s hardly surprising that a man who had given so much of his life to serving his country should live out his final moments in Parliament Buildings, where he had spent so much of his career.

And what is his legacy?  Well, apparently he was not one for great speeches.  He was, rather, a man who got things done and we have him to thank for institutions like the Reserve Bank and portions of New Zealand’s hydro-electric scheme.  His legacy is also one of example, of service, of doing your best in impossible circumstances and of doing the right thing for your country and fellow countrymen.

Coates’ long and distinguished political career can perhaps best be summed up in the words of Winston Churchill: “Success is not final, failure is not fatal: it is the courage to continue that counts.”

I want to thank all those who have worked so hard to bring this exhibition to fruition.  The Rt Hon Joseph Gordon Coates MC and Bar, MP should rightly be considered one of Northland’s favourite sons and it’s brilliant to see his career, achievements and attributes recognised.