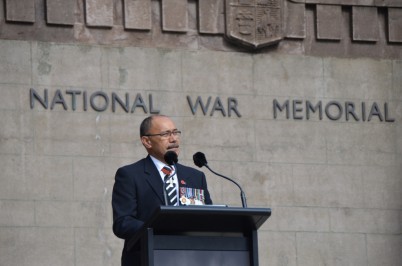 I extend a warm welcome to you all on this special occasion, the official opening of Pukeahu – our National War Memorial Park.

I am honoured to be here as Governor-General of New Zealand, as a former soldier and as a New Zealander.  This is an historic occasion, as we rededicate this sacred site.

Recently, I was here for Pukeahu’s dawn blessing.  I was reminded that this hill has a long history as a bastion for the peoples who have made Te Whanganui-a-Tara – Wellington – their home.  Behind the edifices of the Old War Memorial Museum, the Carillon, the Tomb of the Unknown Warrior and the Arras Tunnel there is another side to Pukeahu.

This is a special place for Māori.  In part, its stories lie in the gardens of Nga Tapuwae o te Kahui Maunga.  The three rocks symbolising Mounts Taranaki, Ruapehu and Tongariro remind us that from time immemorial the spirits of our dead traverse our ancestral hills before they depart to the spirit world.

The statue of Hinerangi looks up at the Tomb of the Unknown Warrior.  She, along with the statue of the woman and children inside the Hall of Memories, reminds us that families bear the brunt of wars.  They remind us of all the women who have bid farewell to their brothers, husbands, fathers and sons; and took on the burden of responsibilities for their families, and then supported the construction of memorials to those who did not return.

So for many reasons, this is an appropriate place in our capital city to commemorate the sacrifice of those who served during times of war and conflict.  Pukeahu, more than anywhere else, reminds us how precious peace is to us all.

Our participation in conflicts around the world has left an imprint on the national psyche – individually and collectively.  Hundreds of thousands of New Zealanders have been affected directly, as combatants or the loved ones of those who have served.

This impact was most evident at the opening of this Memorial in 1932.  Thousands of people covered the hillside in all directions.  Many will have been veterans of the First World War.  Most would have known someone who had served in the First World War.  Many of them would have known people who were killed or maimed.  This Memorial was not about glorifying war – rather it was a shrine to the nation’s grief.

Today is probably the first time since that day when a crowd of this size has been able to gather here.  At Pukeahu New Zealanders finally have a place to gather, to contemplate and to show our collective respect to those men and women who have served their country.

I say this because national commemorations should be a shared experience – standing side by side with compatriots from all walks of life, with people of all ages, ethnicities and beliefs – all drawn together to be in a place of remembrance.

War commemorations are often times of sombre reflection and sorrow.  Equally, they can be times to remember moments of triumph of all that is good in the human spirit.

Our bonds with Australia are a case in point – forged in the appalling conditions of Gallipoli, and enduring in our closest friendship to this day.  On Anzac Day this year – and every year thereafter – the strength of those bonds will be reflected in the red stone columns standing tall across from New Zealand’s Memorial.

It’s fitting that a memorial to our mates from across the Tasman should be the first of any international memorials at Pukeahu.  I look forward to standing alongside the Governor-General of Australia, General The Hon Sir Peter Cosgrove at the Dawn Service here on Anzac Day.

Over time, Pukeahu will reflect other military relationships with the wider world.  Memorials to the men and women of other nations, who have fought by our side, and some as former foes, will have a New Zealand home.

It’s also fitting that inscribed at the entrance to the underpass beneath this plaza is the name “Arras”.  That name honours the New Zealand tunnellers who dug passageways deep under enemy lines, on the Western Front in the First World War, at Arras.  In the tunnels under Arras, the tunnellers’ yearning for home is captured in the names of New Zealand cities carved into the walls.

Memorials are for the living.  In time, Pukeahu will take its place as a destination for New Zealanders who want to learn about our past and our place in the world.  The Rolls of Honour in the Hall of Memories convey the scope of our military deployments over the years.

Memories from yesterday help us understand today and shape our tomorrow.  Long after we have gone, Pukeahu will be here, helping future New Zealanders to carry the torch of remembrance.

Today, I think of those thousands who were gathered here in 1932 and imagine their satisfaction in seeing this place of quiet contemplation and beauty.

Our brave servicemen and servicewomen – past, present and future – deserve this area dedicated to their memory, dedicated to their example.
“He toto heke, he tipare here ki te ukaipō – Blood has been shed to show their commitment for their homeland”.  Ka maumahara tonu tātou ki a rātou – we will remember them.