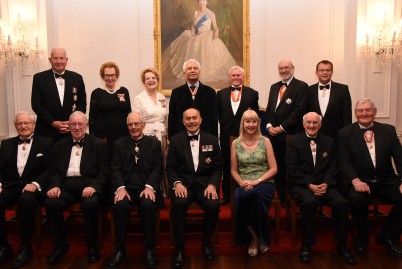 Ladies and gentlemen good evening and my warm greetings to you all.  Welcome to Government House.

As always, it is an honour for Janine and me to share an occasion like this with some of our most distinguished New Zealanders and their guests.

This dinner is intended as an opportunity, on behalf of Her Majesty and all New Zealanders, to show our appreciation for what you have done for our country, individually and collectively.  The dinner is also an opportunity to thank those who have a special association to the Members of the Order of New Zealand.  These distinguished New Zealanders have chosen to celebrate with you.

During my term in office, it has been a privilege to confer The Order of New Zealand seven times – to Dame Margaret, Sir Peter Jackson, Dame Malvina, Emeritus Professor Wendt, Sir Ron, Sir Peter and Richie McCaw.

Since the Order of New Zealand was established in 1987, its standing has grown – both through the collective mana of its Members – and through the whakapapa of individuals and the Badges as they are passed on from one recipient to the next.

Since our last Order of New Zealand dinner in 2014, we have welcomed two new Members, Professor Sir Peter Gluckman, in June 2015, and Richie McCaw, in December 2015.

Sir Peter’s appointment acknowledged his outstanding contribution to scientific research in New Zealand.  We will all benefit from his energetic efforts to promote understanding and appreciation of science across the globe.

When we step down from this role, Janine and I will have some extraordinary memories.  Foremost will be our memories of the people we have met.  New Zealanders, in the main, have shared with us their experiences, their triumphs, their tragedies, and their dreams.  We have been inspired by their achievements, and the contributions they have made to their communities, to New Zealand and to our world.

The Order of New Zealand provides the highest recognition of service and contribution to our nation.

It affirms what we value about service; the pursuit of excellence and creativity; compassion; a commitment to public good; and good character and integrity.

Let me say that your expertise and example have helped to take our country forward – economically, culturally, socially and intellectually.  You have helped shape the way that we see ourselves, the way we conduct ourselves in civil society, and the way we are perceived on the international stage.

Each of you has risen, to an exemplary degree.  The Māori Whakatauki:  “Whaia te iti kahurangi ki te tuohu koe me he maunga teitei – Aim for the highest cloud so that if you miss it, you will hit a lofty mountain”, gives a sense of what you have achieved.  You have aimed high.  You have achieved highly.

On behalf of all New Zealanders, I thank you for what you have achieved in your respective fields of endeavour.

Tonight I also want to acknowledge the wealth of service, experience, talent, and achievement represented amongst the guests accompanying the Members of the Order.  Your guests, our guests, have a special association with you ONZ members.

Accompanying Dame Margaret is Dr John Hall who specialises in Forensic Psychiatry, is a member of the Parole Board and champion bridge player.  Also, Mr Tom Lambie, a dairy farmer, Commissioner of Environment Canterbury and until recently Chancellor of Lincoln University.

Accompanying Sir Peter is his wife Lady Judith Gluckman, an artist and oral historian of Holocaust survivors.  Professor Stephen Goldson, one of Sir Peter’s advisors, is a former chief scientist of AgResearch and New Zealand’s leading expert on biosecurity of invasive insects.

Sir Don is accompanied by his wife, journalist and Honorary Consul for Rwanda, Clare de Lore.  With them is Dr Donna Rose Addis, currently a brain researcher at Auckland Medical School; and Ms Heather Wilcock who is currently playing the lead role of Eva, in the musical Evita.

Lady Pam Lochore has been farming with her husband of 53 years, Sir Brian.  Their daughter Ms Joanne Mossman, as well as working part-time in architectural drafting, also does the accounts for the Lochore farms.

Cardinal Tom’s guests are Mr Pat Williams and Mrs Ann Williams.  Pat, a sales director with John Vaughan Sports is a Board Member of the New Zealand Sportsgoods Association, having been its chair for 26 years.  Ann retired in 2015 from a career in secretarial positions, including with the US Embassy, a PR company and the Archdiocese of Wellington.

Sir Lloyd describes Lady Shirley Geering as having a strong empathy with people, and a great capacity to put people at ease.  Sir Lloyd’s daughter, Elizabeth Hodgson, works in the Research Trust Department of Victoria University.

Dame Malvina is accompanied by her niece Mrs Ann Bennett.  Ann has been as an invaluable ‘Aide-de-Camp’ aka “Bag Lady” to Dame Malvina, both in New Zealand and overseas.  Also, Mrs Angela Gorton, CEO of Canterbury Opera, a former opera singer and until recently a trustee of the Dame Malvina Major Trust.

Jim Bolger is accompanied by two people who played vital support roles in his career.  Firstly, his wife Joan - teacher, mother and special advisor - and secondly, Mr Robert Eaddy, his former Chief of Staff of 11 years.

Distinguished ladies and gentlemen, thank you all for coming this evening and please enjoy the hospitality of Government House.  No reira, kia ora huihui tātou katoa.