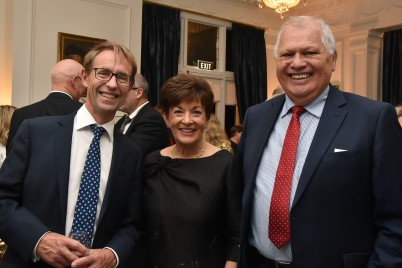 To all Chief Executives who have gathered on this very significant occasion; I bid you greetings

I am delighted that so many Chief Executives are present this evening, allowing me to recognise and thank you for the extraordinary work you do, as heads of our public service, to protect and strengthen public trust in our system of government.

In Aotearoa, we are blessed to have a history of stable institutions of government.

Much of that depends upon on your ability to provide leadership and maintain the trust of your fellow citizens.

Your leadership over the past year in particular, has contributed in large measure to the stability and integrity of government processes during a turbulent time.

Over the past twelve months, we have all experienced unprecedented challenges to our way of life and many of us have developed a new appreciation of our flexible and pragmatic constitutional arrangements.

For example, the Cabinet Office adopted a flexible system of meetings to enable Ministers to consider advice and make immediate and critical decisions.

The Executive Council – over which I preside, evolved to meet the realities of virtual decision-making.

The Epidemic Response Committee was established to provide scrutiny of the Government’s management of the COVID-19 epidemic, complete with live-streaming of its proceedings.

And the judicial branch performed its role as a check on the exercise of executive power.

The Borrowdale challenge to the legality of the lockdown in the Court of Appeal was a means to test the exercise of significant and intrusive public powers by the government against the rights of the individual – and the rule of law.

Over the last year, initiatives that normally might take months or years to develop were implemented at lightning speed.

All of these new ways of operating required a great deal of you and the organisations you lead.  I am well aware that this was not straightforward.  You worked very hard under the water to keep our ship of state sailing smoothly and on its new course.

We found new ways of doing things, and in some cases, we decided to keep doing them that way.

It remains to be seen whether the public service will be expected to maintain this high level of responsiveness as we address other slower-burning, but significant, policy issues of our times.

And also whether our deep reservoir of public trust can be sustained in the event of some hard decisions that lie ahead.

According to the OECD, public trust in government is dependent on high levels of integrity, fairness and openness of institutions.

The extent to which those values are maintained, is determined by the beliefs and behaviours of those who are exercising public functions.

Your own life histories and personal values help determine how you interact with others, what you prioritise and the decisions that you make. Knowing why you wish to respond in a particular way is a valuable leadership attribute.

So too is recognising that our values benefit from scrutiny and revision.

We can see how such revision occurred in our nation’s coat of arms, which you will recall depicts a pākehā woman and a Māori rangatira.

Until 1956, they gazed in opposite directions.  The next iteration of the coat of arms depicted them swivelled to face each other.

So what do those Treaty partners see?

I had occasion to reflect on these matters last weekend when I presided at the investiture of Justice Sir Joe Williams, who has the distinction of being the first Māori judge to be appointed to the Supreme Court.

The investiture, on his home marae at Manaia on the Coromandel Peninsula, was followed by a future-focussed wānanga , where I spoke in my capacity as Governor-General, but also as previous Chief Crown negotiator in a number of Treaty settlements, including that of Sir Joe’s iwi, Ngāti Pūkenga.

I spoke about how my values and world-view had been changed by both experiences.

In large part that has been due to the patience and wisdom of iwi Māori who introduced me to a world I had known far too little about.

I have been privileged to experience first-hand how tikanga is underpinned by a framework of particular values:

whanaungatanga – our sense of connection and relationships with each other;

manaakitanga – our obligation to uphold and support the mana of others; and

kaitiakitanga – our duty to be vigilant guardians of the natural world.

Sir Joe has been on a mission to introduce better understanding and respect for this framework of values into our nation’s court-rooms, with the goal of improving our woeful statistics regarding Māori incarceration.

I am aware that Justice is not the only area of government where the two worlds of the Treaty partners are becoming more closely aligned.

When young public servants are showing a thirst to learn Te Reo Māori, to understand the principles of Te Tiriti and to increase their cultural competence, there is cause for optimism that our government institutions will be better placed to serve our citizenry in 2040, when a third of New Zealanders will be Māori or Pasifika.

We know that such transformation takes commitment, and that the momentum cannot be lost. To quote Sir James Henare:

We have gone too far not to go further, and have done too much, not to do more”.

I encourage you to welcome and lead this change, with the same courage, commitment and flexibility that you have shown over the last year.

Think about how this might be reflected in our future coat of arms.

Currently, the pākehā woman rests her arm along the top of the shield that stands between her and the rangatira. I hope we live to see the day when his arm is also resting on the shield, with their hands united in kotahitanga.

In closing, I want to take this opportunity to thank you all for the support you have given me in my role as Governor General.

This position is a special and unique one, in the true sense of that word.  After all, it takes an ordinary New Zealander from a position of relative obscurity and places them at the top of our constitutional framework, as representative of our Head of State for a period of five years.

The value of this role depends in significant part upon the way in which it is recognised and respected by our people.  You all have an important leadership role, in the way in which you have shown respect for the role of the Governor General, and I do sincerely thank you for that.

It has been a pleasure and a privilege to represent my country and I have valued my interactions with you all.

I do hope you and your partners enjoy our Government House hospitality this evening.