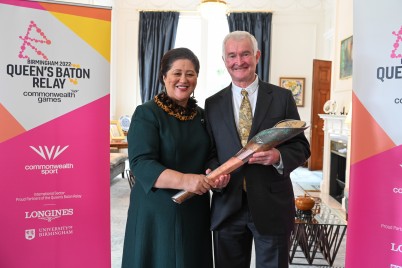 Ladies and gentlemen, warm greetings to you all, and welcome to Government House Wellington.

Dr Davies and I are delighted to host you here today, and we are particularly appreciative of your presence, given the current Omicron outbreak.

We welcome this opportunity to acknowledge the Queen’s Baton Relay as it makes its way around Aotearoa on Commonwealth Day.

Soon, the Baton will depart for Australia. The next time our athletes will see it, they will be listening to the Queen’s message at the opening ceremony.

As I look at the Queen’s Baton, I see a symbolic representation of the city of Birmingham: of its industrial past and its innovative future.

I also see how it represents a connected Commonwealth. When the Baton reaches its destination, it will have been carried by 7500 bearers across all 72 nations and territories competing at the Games.

At every stage in its journey, it reminds us we are part of the bigger Commonwealth picture. We have a shared history, we share the Commonwealth principles, and this baton unites us in our anticipation of the Games.

Connectedness has taken on a new dimension in the age of pandemics.

To keep each other safe, we have become well-acquainted with the idea and practice of physical distancing. We have been separated from the wider global village; from our friends and whānau overseas; and from our communities.

However, we have also witnessed a tenacity in the human spirit in our efforts to connect and be together. The continuation of international sporting competition has become a symbol of those connections.

Over the years, our athletes have provided us with moments of great national pride, forever engrained in our national psyche. At such times, we feel truly united under the symbol of the fern.

We don’t need vast experience of kayaking or swimming to be inspired by Dame Lisa Carrington or Dame Sophie Pascoe. Their outstanding performances speak for themselves and their achievements and sportsmanship inspire us all.

The Commonwealth Games have long been the setting for such memorable moments. Many will remember the extraordinary  Precious McKenzie winning gold for not one – but two Commonwealth countries – and Dick Taylor’s unexpected but convincing win in the 10,000 metres at the Christchurch Games

In 2022, there will be more chances to add to our sporting legacy. I would like to particularly acknowledge our women’s T20 cricketers, who will compete for the first time in this newly added Commonwealth Games event.

Today, I am also delighted to be welcomed to the New Zealand Olympic whānau as Patron – continuing in the role as my predecessors before me.

I acknowledge that for our athletes departing for Birmingham – and those recently competing in Tokyo and Beijing – the experience is very different than it has been in years gone by.

There has been so much uncertainty and no doubt many sacrifices have been made, just to get to the starting line But there is one thing our Commonwealth Games athletes can be absolutely sure of – and that is that they will feel the support of us all watching at home.

My best wishes to the New Zealand team destined for Birmingham. Whether they are returning to build on previous performances, or competing for the first time – I know they will do us all proud.