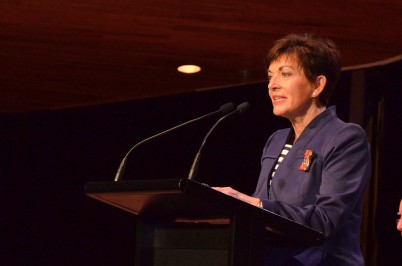 Thank you for inviting David and me here today.

I welcome this opportunity to join with members of the Defence Force, past and present, to represent the RSA’s Patron, Her Majesty Queen Elizabeth, in this my second week in the role of Governor-General and Commander-in-Chief.

First – let me congratulate you on reaching your centenary.

In thinking back to 1916, we can only imagine the huge challenge the fledgling organisation must have faced as it responded to the needs of Gallipoli veterans, and then to the massive numbers returning from the Western Front in the succeeding years.

It seems to me that while circumstances have changed considerably since 1916, what has not changed is the need to care for our veterans.

The soldiers who returned from the First World War quickly discovered that civilians had little empathy or interest in what they had to say – and that only another veteran could fully understand and appreciate the impact of their military service.

The RSA became their champion in their dealings with Government. Its rooms became a haven of mutual support and comradeship, where veterans could honour the mates who were no longer with them.

After 100 years, the fact that there are 181 local RSAs around New Zealand confirms that those services are still needed today.

It also shows that the RSA has been able to adapt to the changing needs of the times and become more inclusive.

We have seen your doors open to serving members of the Armed Forces, to personnel of the ‘fourth service’ – the Merchant Navy, to those New Zealanders who undertook compulsory military training, and to police officers who have served on peace-keeping missions.

More women have found a place as well, as associate members who share your values. So you have found strength in your diversity.

I was interested to learn that about two-thirds of New Zealand’s current veterans served in conflicts that have occurred since Vietnam, and that the number of veterans is increasing, due to New Zealand’s contributions in Afghanistan and Iraq.

The challenge, as always, is to reach out successfully to younger veterans, to cater to their expectations, and to grapple with new and emerging issues, ranging from post-traumatic stress injuries, to exposure to environmental toxins.

In undertaking this invaluable work, the RSA depends on many unsung heroes – the volunteers – the Support Advisers, home and hospital visitors, and the many people who assist with your annual poppy appeal.

They give time and energy to fulfil the RSA’s mission to care for all of those people who have been affected by the impact of military service.

You enjoy widespread public support and you have earned it by the support you have provided to our servicemen and women.

When a veteran is isolated or unwell, the value of human contact and conversation cannot be over-estimated. RSA volunteers keep an eye on veterans, provide a sympathetic ear, ensure that they are getting the support that they need, and help their families where they can. Their commitment, compassion and comradeship is exemplary – and reflects the best traditions of our armed services.

I am sure you have much to get through today, and I am aware that the Prime Minister has some important matters to speak about, so I will conclude my remarks by formally opening your Annual General Meeting.

I wish you the very best for a productive and stimulating meeting – and for the challenges of the year ahead.