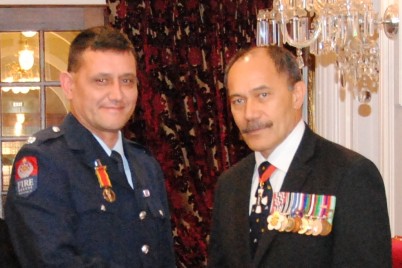 As Governor-General and Patron of the Royal Humane Society of New Zealand, it is an honour on behalf of the Society, to host this ceremony and to acknowledge with awards those who have risked their lives to save another.

The Royal Humane Society has long been part of New Zealand’s formal acknowledgement and recognition system.  For 115 years, it has bestowed awards for acts of bravery, and for all humane acts of a like nature.  Those being recognised today have demonstrated exemplary bravery, and it is appropriate they are recognised in this way.

Ladies and gentlemen, as each recipient is honoured, I invite you to join me in thanking and congratulating them for their bravery.

Hewitt Humphrey will now summons the recipients, and read a citation for each person.

AND TO RECEIVE THE ROYAL HUMANE SOCIETY OF NEW ZEALND BRONZE MEDAL:

Shortly after 9am on 6 October 2008, on State Highway 1 near Richmond Road, Oamaru, a car collided with a power pole bringing down a live transmission line which came to rest across the roof of the vehicle.  Power was arcing through the vehicle causing the surrounding ground to become live. Fire developed in the engine bay and the tyres caught alight.

Rural Fire Officer, Eric Spittal, was one of the first people to arrive at the scene.  He immediately approached the vehicle intending to assist the passengers to get out, but he received a shock which knocked him off his feet.  He then took a small hand held extinguisher and approached the car to attempt to put out the engine fire.  That proved to be inadequate and he went to get another.  However, this time, as he climbed under the vehicle, which was on the grass verge, he experienced pain and a tingling feeling throughout his body.  Realising the danger he was in he quickly moved away from the car.

A number of people were using fire extinguishers to attempt to deal with the burning tyres which were filling the car with smoke, but they kept reigniting.

Police, ambulance and fire services arrived.  An oxygen bottle and mask were thrown into the car, which provided some relief from the smoke.  However there was no indication of when power to the line could be isolated.

Faced with the live power line touching the roof of the car and the burning tyres likely to collapse and earth the car, putting the occupants at serious risk of death, the Fire Service personnel decided immediate action was essential and that an attempt had to be made, using a fibreglass pole, to lift the power line off the vehicle, long enough for those in it to get out.

Fire Officer Brett Delamere undertook the task.  At his first attempt he could not lift the heavy cable sufficiently and the electricity arced back to the roof, burning it.  Lowering his grip on the pole he made a second attempt and succeeded in lifting the cable high enough to break the contact for a matter of seconds and provide sufficient time for others to safely remove the occupants.

On the afternoon of 1 January 2012, while exploring a stream above a waterfall in the Motatapu Gorge near Wanaka, Dion Latta, aged 15, a school pupil of Palmerston, slipped and fell backwards into the waterfall and became trapped, with his leg caught between two rocks.

When Senior Constable Johnston of the Wanaka Police Search and Rescue, and a leader in the Wanaka Land SAR swift water rescue team, became aware of the mishap he immediately drove to the Gorge.  He had been there previously and knew that the best access to the accident site would be by swimming and climbed up to it.

On arrival, he saw a foot sticking out of the water about 50cm below the rocks on the right of the waterfall and could see the silhouette of the boy in the main flow.

He climbed into the pool of water above where the boy was trapped and underwater, using a dive mask, was able to see the foot.  He made several attempts to reach it, but could not due to the strong current.  He then attempted to reach it by lying across a rock on the top of the waterfall.  He reached down the leg but could not budge it.

The strong current striking his shoulder caught Michael Johnston by surprise, resulting in him slipping down the face of the rock and into the 1.5 metre deep pool of turbulent water below the waterfall.

He climbed back and took hold of the boy’s hand attempting to pull him to the side and out of the flow of the waterfall but was unable to move him even slightly.

Several members of the Wanaka Alpine Cliff Rescue team arrived and one, Milo Gilmour, wearing a dry suit was lowered down the waterfall to a point above Constable Johnston to block the flow of water and reduce the water pressure on him.  That permitted him to dive low enough to get a sling around the foot.  Another team member, Geoffrey Wayatt, succeeded in attaching a sling to the boy’s wrist.  Joined by another team member, Richard Raynes, the three were able to manoeuvre Dion Latta out of the waterfall and on to the rock beside it.

CPR was commenced and Dion, who was unconscious, was taken by helicopter to Dunedin Hospital.  Regrettably he did not recover and died in hospital.

Concluding remarks
Ladies and Gentlemen: During my time as Governor-General, I have had the privilege of presenting the rarely awarded Royal Humane Society gold medal once, to everyone – known and unknown – who put their lives at great risk to help others in the aftermath of the Christchurch earthquake on 22 February 2011.

In March and September last year, in ceremonies in Dunedin and here at Government House, I had the privilege of presenting Royal Humane Society medals to six brave individuals who rescued people who were either caught in house fires or were in danger of drowning at sea.  And today I have had the privilege to present two silver medals and one bronze medal to three more brave New Zealanders.  They all demonstrated the greatest of all human qualities: compassion and the courage to risk their own life to save the life of another.

When Eric Spittal, Brett Delamere and Michael Johnston woke up on the respective mornings of the events we have heard of, they had no inkling of what was to unfold that would result in them being called upon to save someone’s life.  The citations we have heard give us a glimpse of what must have been alarming ordeals.  However, it is only a glimpse because words on paper can never recreate how it was, and how they felt at the time; the danger, the apprehension and the fear they experienced.

So often, we hear heroes say: “I just did what anyone else would have done” or “I did it because I hoped someone else would do the same for me.”  While we would all like to aspire to that intent, there can be no doubt that these men did.

Like life itself, not all courageous acts result in happy endings.  As we have heard, despite the heroic efforts of Senior Constable Johnston and members of the Wanaka Alpine Cliff Rescue team, unfortunately, the life of 15-year old Dion Latta was lost.

It takes great courage, great determination and compassion to act selflessly and to risk your life when you have no idea of the outcome.  It is sometimes suggested that acts of bravery of the nature we have heard of today borders on a momentary insanity.  The history of the Society’s awards contains many heroic stories where the rescuer lost their life trying to save another.

All three of you could have decided to act differently, considering the risks too dangerous to attempt a rescue.  And yet each of you made a conscious decision to act.  That is the legacy that you and all those who have received Royal Humane Society of New Zealand Awards share.

I am reminded of the words of Nelson Mandela who considered the link between fear and human courage.  He said:
“I learned that courage was not the absence of fear, but the triumph over it. The brave man is not he who does not feel afraid, but he who conquers that fear.”

As Governor-General and Patron of the Royal Humane Society of New Zealand, I congratulate you Eric Spittal, Brett Delamere and Michael Johnston on your gaining your respective medals.  I also thank you sincerely all for what you did in risking your life to save another person.