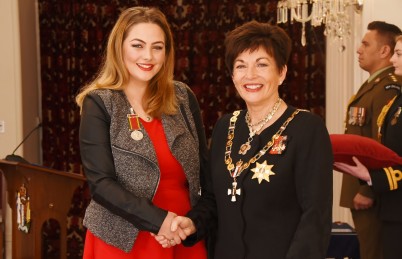 Distinguished guests, ladies and gentlemen, warm greetings to you all and welcome to Government House.

The Royal Humane Society has been a part of New Zealand’s formal acknowledgement and recognition system for 117 years. During that time, it has recognised acts of bravery, and other courageous humane acts of a like nature.

As Governor-General, it’s an honour to host this ceremony and to acknowledge those who have risked their lives to save others. As an aside, this is the first awards ceremony I will undertake as Governor- General, so today is as unusual and exciting for me as it is for the recipients.

Before the ceremony begins, Mr Austin Forbes, President of the Royal Humane Society of New Zealand will make some comments.

Ladies and gentlemen, today’s recipients have demonstrated exemplary bravery, and it is appropriate their actions are being recognised.

The Official Secretary, Gregory Baughen, will now summon the recipients, and read the citations.

As each recipient is honoured, I invite you to join me in acknowledging, thanking and congratulating them for their bravery.

Today I have had the privilege of presenting Royal Humane Society awards to eight brave New Zealanders. Their citations tell us of the tremendous courage and compassion each of them demonstrated in dangerous circumstances.

These awards are commendations for bravery but also acknowledge other attributes – selflessness, care for others and quick thinking.

In both these cases, the risk of personal harm to the recipients was high. Fire and water play into humankind’s oldest fears. For a person to stand close to the flames to pull an injured person out of a car, or for an untrained person to enter the water to rescue someone, requires courage and strength of character. These recipients showed presence of mind and great care and concern for others in choosing to provide help.

The two events we’re talking about today show what is possible when ordinary people are thrust into extraordinary situations. Many recipients of awards of this type insist that they were only doing what anyone would do. It’s a very modest response and tells us a lot about the integrity and character of the person concerned.

The citations give us a glimpse of the extreme nature of the emergencies these people were involved with. Hearing about the dangerous conditions makes us all wonder how we would behave if faced with a crisis of this sort.

These two events had two different outcomes. For the Evans family, the presence of the five recipients was the difference between life and death. They must be grateful that their rescuers happened to be there to help out that afternoon.

The second event had a sad conclusion. The family of the rescued man must take some comfort from knowing that there were people who tried to help and gave him the best possible chance of survival.

Each of you has consciously acted to save the lives of others and you deserve your place with other New Zealanders who have been honoured by the Royal Humane Society throughout its 117 year history.

On behalf of all New Zealanders, I thank you sincerely for your courage and commitment to action.

I invite you to join me in singing our national anthem “God Defend New Zealand” in Māori and English.