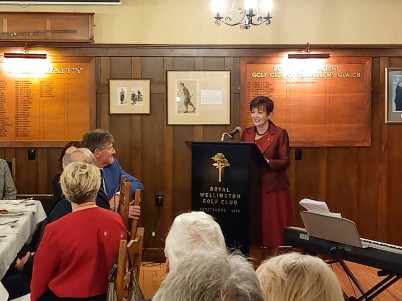 And thank you Andrew for your kind introduction.

David and I were delighted to be asked to join you here this evening to acknowledge and celebrate the long relationship between the Royal Wellington Golf Club and the office of Governor-General.  Especially since we were unable to accept your invitation in 2017 when you were hosting the Asia Pacific Amateur Championship because of a foreign travel commitment.

That seems so long ago - there’s little risk of foreign travel commitments for any of us at present.

It’s wonderful to be here in these beautiful surroundings – and in such congenial company, with a number of our old friends and colleagues.

As I near the end of my term as Governor-General, I have been reflecting on the extraordinary opportunities I have had to meet New Zealanders from all walks of life, in every region across the country, on all three main islands.  Sadly, we never did make it to the Chathams.

I have joined fellow citizens in commemorating significant events in our history and heritage, and in celebrating the institutions that have helped to define our communities.

Hence my decision at the beginning of my term to accept vice-regal patronage of the Royal Wellington Golf Club.

The first Governor to grant such patronage to the club was the Earl of Glasgow, in 1895, when the Club was founded.  And I am not certain, but I expect that the patronage has continued unbroken since then.

No doubt there have been some keen golfers amongst the ranks of Governors and Governors-General over these years.  I haven’t found too many stories about their prowess, but I understand that one of my predecessors – though I’m not sure exactly who, did not bother to follow the members’ dress code when he first came to Heretaunga.

Unfortunately, he had the temerity to turn up to play wearing trousers, a white shirt and red braces – but minus the required jacket.

I believe he was prevented from playing by the Club Secretary who apparently did not recognise him, and I understand he never returned.

Another one of my predecessors - Lord Jellicoe, is probably best remembered for his prowess in another sport – yachting, unsurprising perhaps for a former Admiral of the Fleet.

But he also enjoyed golf and perhaps because the playing dress code had by then been relaxed, he successfully led a team of Club members against representatives from the Royal Navy here at Heretaunga, in the early 1920s.

And there’s Lord Cobham, Governor General from 1957 – 1962, was an enthusiastic golfer and provided the trophy for which I believe you still compete.

A A Milne once suggested that the reason that golf is so popular is because it is the best game in the world, at which to be bad.

I’m not exactly sure what he meant.

My own efforts at golf were encouraged by my good friend and former business partner, Sir Paul Collins.  For Christmas one year he gifted me some free lessons, shortly after he had taken up the sport himself.  He assured me that no matter how bad I was, I probably wouldn’t be worse than him, so what did I have to lose.

Well, despite that encouragement as well as the free lessons, I soon realised that if I’d persevered, I might have proved him wrong, so I retired gracefully.

I am, however, a keen spectator of the sport, and I’ve followed the careers of our world-class champion golfers, including Sir Bob Charles, Frank Nobilo, Michael Campbell, and now Lydia Ko.

It was an honour to host Sir Bob at last year’s Government House dinner for Members of the Order of New Zealand.  I found him fascinating to talk to.    And of course, he is truly world famous.

I recall meeting President Trump at the D Day commemorations in Southampton in 2019.  On learning that I was a New Zealander, he promptly informed me that he knew Bob Charles, who was also a great golfer.  Damned with faint praise, perhaps?  I didn’t know what to say…

No doubt Sir Bob recalls Heretaunga fondly, as I understand he won his first open here in 1954 as an 18 year old.  An amazing feat for a young man from South Wairarapa who had never had a golf lesson.

I was delighted to invest Lydia Ko as a Member of the NZ Order of Merit in 2019.  What a wonderful young woman she is, and a splendid ambassador for New Zealand.  It has been gratifying to see her regain her form this year.  I’m sure we all have high hopes for her in Tokyo, along with her team-mate Ryan Fox.

As you can imagine, David and I are really disappointed that we are not able to be there in Japan to support our Olympic Team this year and to cheer them on.

Lydia and Sir Bob illustrate another great plus for the game of golf, and that is that it can be played by men and women of all ages.  Sir Bob assured me at age 85 he is still playing regularly.  I seem to recall that his current handicap is three, although he has recently been known to play rounds below par.

I was impressed to learn that female participation was embraced and promoted by the Royal Wellington Golf Club from its very beginnings in the 1890s, when New Zealand women had just won the right to vote and were pushing through barriers to education and the professions.  In fact, I understand that women played a significant role in establishing your Club.

I note that it was still many decades before women were accepted as members in certain other Clubs in Wellington.

In 2018 we had a wonderful year of celebrating female emancipation and empowerment - 125 years after New Zealand became the first country in the world to grant female suffrage.

As Governor General, and just the third female in this role (out of 36) I’ve enjoyed many opportunities to celebrate the achievements of women.  At various events and gatherings I’ve reflected on the positive changes that have occurred in my own lifetime while acknowledging that we still have a way to go before gender is no longer an issue of significance or discrimination.  And we still have much work to do to achieve fairness and equality in many other aspects of our society.

However, in the past two years our focus has been drawn away from such matters and we have understandably become preoccupied with the looming existential challenges we face.

Not only are we confronted by a life-threatening pandemic, the reality of climate change and the fragility of our environment require us to acknowledge our responsibilities to adopt more sustainable ways of living on the planet.

You will be well aware of the concerns raised about land and water use, nitrates, pesticides and insecticides – and the proliferation of introduced predators in our environment.

Golf courses have not escaped scrutiny.

I’m delighted to see that these are issues that your Club has already taken on board, with your efforts to eliminate stoats and rodents from the courses and your significant progress in reducing the use of water by adding no-mow areas, and changing the type of grass you plant.

I commend the work you undertook to attain GEO Certification in 2017, and in being named Golf New Zealand’s Environmental Club of the Year just last month.

I encourage you to keep providing this leadership of sustainable practices for golf courses in Aotearoa New Zealand.

One of the few silver linings of the pandemic has been the increased interest people have showed in getting outdoors, including spending time on our golf courses.

In thie regard I note that you have “provided  greater  recreational opportunities for walkers, runners and cyclists with the formation of a pathway between the fence and the bank of the Hutt River and by planting the River margins with native vegetation, greatly improving the visual appearance of the area and providing stability to the riverbanks vulnerable to flooding”.

Perhaps you have thereby ensured that the Mark Twains of the world can still enjoy a good walk here, without ruining it by including a round of golf.

For golfers and non-golfers, I am sure Heretaunga will continue to provide valuable opportunities to enjoy fresh air and exercise, spend time with friends and put aside the stresses of the workday world.

And with your collective commitment to the Club’s future and good fortunes, it will be in good hands.

New Zealand Riding for the Disabled