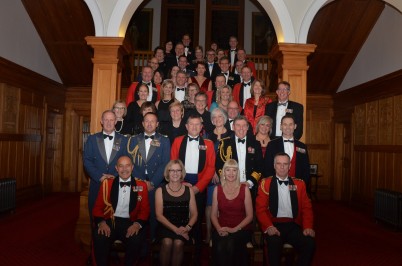 First let me congratulate you, General Keating, and you Air Vice-Marshal Short on your recent reappointments.  The Defence Force will benefit from the stability your reappointments give at its most senior leadership level.

As our time at Government House nears its end, Janine and I are taking opportunities to recognise people who play significant roles in our public institutions – the people who give special service to New Zealand.

Already, we have acknowledged the judiciary, the police leadership group and public service chief executives.  Later we hope to acknowledge the Fire Service.

Tonight, Janine and I take the opportunity to acknowledge and thank you, the leaders of the men and women of the New Zealand Defence Force, for your leadership and service.  We also think it a fitting time for us to recognise the husbands, wives, partners and friends who have supported you behind the scenes.

In discussing what I might say tonight, it was suggested that I could reminisce about my time with the New Zealand Defence Force.  That was not really an option, given that I did that five and a half years ago.  I am also reluctant to recount past experiences because things have changed since 2011, and you and the Defence Force are on an upward pathway and doing much more exciting things than “we” were doing back then.

What would be more appropriate, is for me to make some observations about you and your organisation based on my fleeting contact with the Defence Force and its people, as your Commander-in-Chief.

The New Zealand Governor-General's relationship with the Defence Force is largely ceremonial.  As far as I can tell only one of my predecessors, Governor Sir George Grey, has led troops into battle, and that was in South Taranaki in 1865.  And the last time a British monarch took personal command of an army was 225 years ago.

While it may be a relief to you to know that I have no intention of interfering with those traditions, I was reminded that until April 2013 I had a Reserve commitment!

In 2009, Janine and I came to a similar dinner to this at Government House Vogel, hosted by our predecessors, Sir Anand and Lady Susan Satyanand.  Seven years later I am standing here, as his successor, speaking to a fresh group of senior officers.

The moral of that story is – watch out – because there is a possibility one of you might be shoulder-tapped to succeed Dame Patsy in five years’ time.

My continued contact with the Defence Force has given me contact mostly with its younger members - from my ADCs to members of the Guards of Honour who have been such a focus of State Welcomes, Credential Ceremonies, commemorations, and or on parade days.  I can tell you that Ambassadors, Heads of State and Royalty regard the military’s powhiri as an absolute highlight of their visits to Government House.

When we have travelled with the Defence Force, Janine and I have always been well looked after - whether when flying with the RNZAF or on-board RNZN vessels.  Our use of NZDF-assets has enabled us to fulfil our community leadership and ceremonial roles.  We’ve flown to and from Waitangi and elsewhere in New Zealand and into the Pacific.  And the RNZN supported my visit to the farthest parts of the realm of New Zealand – Tokelau.

One trip that did not eventuate, very much to my disappointment, was a trip to the Kermadecs.  Being unable to take the time to sail on Canterbury to the Kermadecs, I suggested that I could do a parachute descent into water and then a recovery on to the ship.  Suffice it for me to say it didn’t happen.  There was much sucking of breaths here, down town and I assume out at Joint Force HQ.  There were some relieved people around Government House - my ADC Flight Lieutenant Tom Fletcher for one, the Official Secretary and Clerk of the Executive Council – two - and most importantly Janine!  The lesson – learn when to give it away.  And so when CDF suggested I could do one last freefall descent, a slight heart flutter and then reality set in and a polite decline.

It was our fortune to have this Vice-regal role during the WW100 commemorations.  Janine and I have represented New Zealand at Anzac Cove and Chunuk Bair twice.  There and on other occasions we have honoured our citizen army of the First World War.

I have also been fortunate to be involved in the opening of New Zealand’s national War Memorial Park – Pukeahu; in the commemoration of the start of the First World War at a service of remembrance in the UK; and to have commemorated the 100th anniversary of the Gallipoli landings with the Governor-General of the Commonwealth of Australia, General Hon Sir Peter Cosgrove, at the dawn service at our National War Memorial and the evening service at the Australian War Memorial in Canberra.

In particular, Janine and I have valued the opportunities we have had to go to Gallipoli, and to learn of what happened there.  The warmth of the welcome that we have received on each visit confirms the close connections New Zealand now has with Turkey, and that shared hardship can result in deep mutual respect.

The commemorations have also cast a spotlight on events that changed our nation forever.  They have sparked a renewed interest in family histories.  New Zealanders have been interested to know about how our family members were affected by the First World War.  In my own case, I now know more about what my grandfathers did in that war.

Commemorations of events from the Second World War have also been special because I have been able to meet our veterans – living taonga.  The men and women who served and fought during the Second World War at the River Plate, at Cassino, Normandy, Crete, in the skies and elsewhere are of a gallant generation.

I have two enduring recollections from my attendance at the D-Day commemorations.  The first is of Her Majesty talking to our veterans and impressing Des Laurie, a Warrant Officer pilot, when she questioned him about his service in Burma.  Her Majesty had recognised his Burma Star.  The second, is finding out that a New Zealander, Lieutenant Neil Harton, had captained the patrol boat that led the invasion-flotilla across the Channel.

Each year we are reminded that the ranks of that generation are diminishing rapidly.

The new Defence White Paper will give you better certainty over what you can influence and effect.  A cursory glance suggests you and your successors have some more transformation to do.  The capability mix, and with it the operating funding, augurs well for the future.

While there has been change, and more to come, it is apparent that the sense of purpose, professionalism and dedication of every member of the Defence Force remain firm characteristics.  The collective sense of mission - vision – values is evident in what we read about and what I sense.  If there is something that I miss, it is the camaraderie that comes from the kinship of serving “at Her Majesty’s pleasure”.

Janine and I having served as Her Majesty’s representatives in New Zealand for the past four plus years are facing exciting transitions of our own.  Before we leave Government House, one of the remaining tasks will be to select an image for my official portrait, to join those of the other Governors and Governors-General in the main hallway; and a photograph of Janine and me for the Auckland house.

Influencing my decision of the portrait that I will select to hang on the wall here is the decision I took when I chose to use my military rank in my full formal title.  Despite it being a bit of a mouthful, using my military rank in my title reflects the value I attribute to the career and opportunities I had as a soldier in the New Zealand Army and as an officer in the New Zealand Defence Force.  I thought it also fitting for the men and women of the Defence Force to be thus recognised.
Recently I was asked to provide a favourite Shakespeare quote for a fundraising initiative by the British High Commission.  Not surprisingly, I found myself drawn to these lines from Henry V, which sums up the very essence of what you men and women and the uniformed and civilian staff of the Defence Force represent - a warrior spirit:

Once more unto the breach, dear friends, once more;
Or close the wall up with our English dead.
In peace there's nothing so becomes a man
As modest stillness and humility:
But when the blast of war blows in our ears,
Then imitate the action of the tiger.

It is the courage and commitment of and to comrades that carries us on our journey.  It is the people and our fond memories that give effect to comradeship.  And, with that I have, as reminders of your support and fellowship: from the Air Force – a bomber jacket; from the Navy a Wilkinson Sword (but alas, not the uniform I was promised); and from the Army, memories and a patrol-red uniform for my official portrait.

On that note, I would propose a toast: to the men and women of the New Zealand Defence Force who serve our nation honourably and loyally.
Kia ora, kia kaha, kia manawanui, huihui tātou katoa.