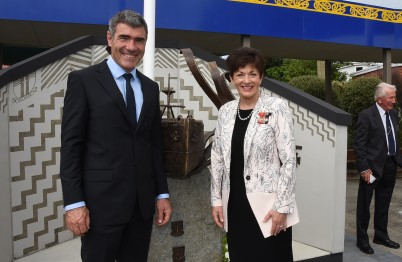 Thank you for inviting me to be a part of today’s commemorations, as we remember the sinking of the New Zealand Shipping Company’s cargo liner SS Otaki, one hundred years ago.

When they set out on what was to be their final voyage, in March 1917, the crew would have been well aware of the dangers they faced.

Germany and the Great Britain were at war and Germany sought to cut off supplies to their enemy. U-Boats lurked beneath the waves, and armed ships disguised as merchant vessels stalked their prey above the waterline.

So many ships were being lost that it has been described by one historian as a “massacre of merchant shipping”. In February 1917, just one month before the SS Otaki set out, over 600 merchant ships from neutral countries had refused to sail.

However, as United States Navy Rear Admiral Grace Hopper once said “A ship in port is safe, but that’s not what ships are built for.”

To stay alive, Britain needed supplies. It needed the merchant vessels to ply their trade.

So it was that SS Otaki, carrying 71 crew, set sail from London for New York.

Survivors of this encounter are long gone, so we can only imagine what ensued once Moewe broke out its battle ensign – the fear, adrenaline and chaos of the engagement – the deafening gunfire, and the shouting men and their despair as the Otaki began to sink. Six of Otaki’s crew lost their lives, along with five on the Moewe.

The gifting of the Otaki Shield to Robert Gordon’s College and a scholarship was a fitting way to remember the courage of Archibald Smith, the Captain of the SS Otaki, who received the ultimate accolade, the Victoria Cross.

These young people enrich both schools and communities during their time overseas – as well as gaining valuable life experience for themselves.

Since 2014, the First World War centenary commemorations have given us an opportunity to consider the nature of that conflict – and to acknowledge the different ways people contributed to the war effort.

We have recognised the role of our defence forces and also the vital role played by nurses and the merchant navy.

As we unveil this monument, we will remember not only those who died on the SS Otaki but also all those who risked their lives on ships in the First World War.

Elements representing the history of the SS Otaki – the merchant navy crest, the Victoria Cross and the New Zealand Shipping company have been combined with the twin crests of Otaki College and Robert Gordon’s Colleges – as well as other symbols relating to a student’s journey to success.

This memorial will be a lasting tribute to courage, a celebration of scholarship and reminder of the links that bind us both to our past and to our friends across the seas.